To celebrate today’s release of our 104th 33 1/3 on  Freedom of Choice, we’re pleased to bring you the fourth installment of Devo week by author Evie Nagy!

So here we are, today is release day for Devo’s Freedom of Choice (along with 33 1/3s Koji Kondo’s Super Mario Brothers by Andrew Schartmann, and Dead Kennedys’ Fresh Fruit for Rotting Vegetables by Michael Stewart Foley). Now anyone with a mind to read it can, and can publicly say or write anything or nothing about it.

After the stress eating, this got me thinking about a theme of several chapters of the book: Devo’s relationship with the press, about which “it’s complicated” would be a serious understatement. As soon as Devo had an international profile, beginning even before Freedom of Choice in the late ’70s, reporters and critics were tripping over themselves trying to figure out Devo’s ratio of serious to bullshit. Were they art, a novelty, a joke, a serious political movement? The idea that they could be all of these things intertwined, and not actually hiding anything, was too much to deal with, so the critical consensus usually boiled down to “they’re opportunists who are full of crap, but they’re smart about it.”

And sure, critics had some reason to be annoyed, at least if they were the type who liked their artists earnest and would have walked out on Andy Kaufman reading The Great Gatsby. Devo’s approach to the press is best or at least most efficiently demonstrated with the Freedom of Choice press kit and its insert called “Devo Meets the Press,” generously lent to me for the book by Michael Pilmer and the Devo-Obsesso.com Archives. It’s presented as an FAQ to help reporters prepare for interviews, but it’s mostly lies (ex: Q: What is it about Ohio that inspired the formation of Devo? A: Clean living). But the lies are so obvious (and some of the answers are perfect truths), that for those paying attention, it’s not too hard to figure out what Devo is really about, and how they are communicating one thing when they say another. 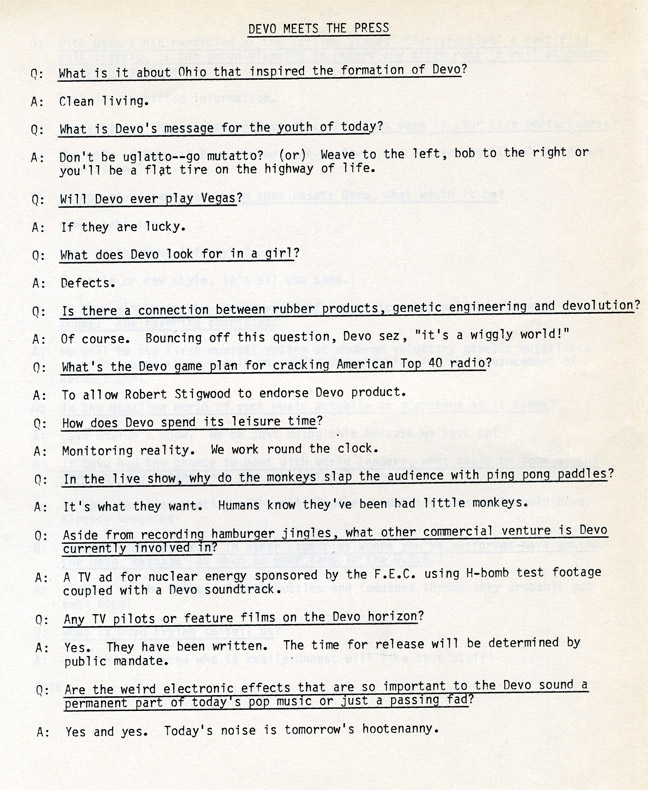 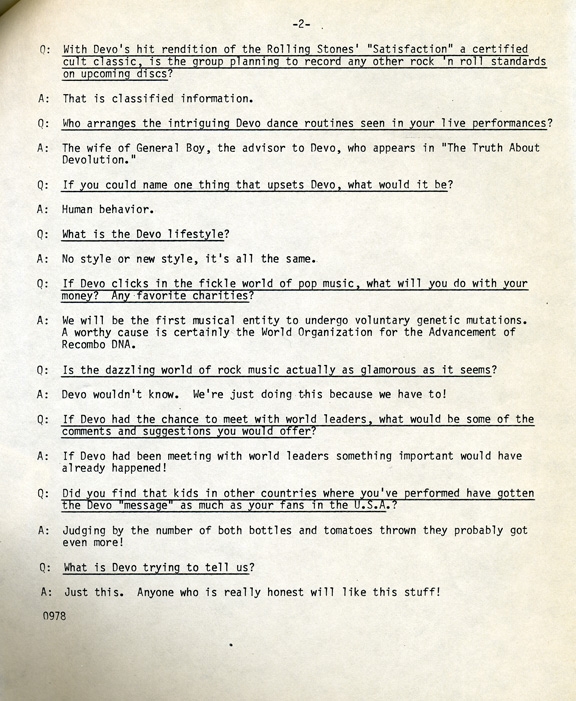