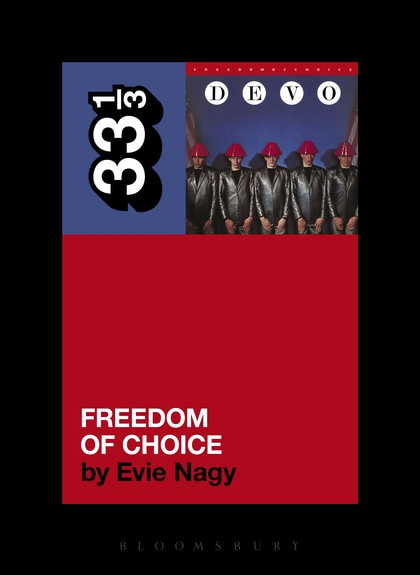 On May 16, 1980 Devo released Freedom of Choice and thirty-five years later the album will get the 33 1/3 treatment by Evie Nagy! Fred Armisen, who has expressed his love of Devo before, will grace the book with a short forward. Thanks Fred!

Finally, after all that waiting, The Future arrived in 1980. Ohio art-rockers Devo had plainly prepared with their 1979 second LP Duty Now for the Future, and now it was go time. Propelled by the new decade’s high-tech, free-market, pre-AIDS promise, 1980’s Freedom of Choice would rocket what Devo co-founder Gerald Casale calls his “alternate universe, hermetically sealed, alien band” both into the arms of the Earthlings and back to their home planet in one scenic trip.

Before an artistic and commercial decline that resulted in a 20-year gap between Devo’s last two studio records, Freedom of Choice made them curious, insurgent superstars, vindicated but ultimately betrayed by the birth of MTV. Their only platinum album represented the best of their unreplicable code: dead-serious tricksters, embracing conformity in order to destroy it with bullet-proof pop sensibility. Through first-hand accounts from the band and musical analysis set against an examination of New Wave’s emergence, the first-ever authorized book about Devo (with a forward by Portlandia’s Fred Armisen) explores the group’s peak of success, when their hermetic seal cracked open to let in mainstream attention, lots of cocaine and the occasional violent Italian dwarf. “Freedom of Choice was the end of Devo innocence–it turned out to be the high point before the s***storm of a total cultural move to the right, the advent of AIDS, and the press starting to figure Devo out and think they had our number,” says Casale. “It’s where everything changes.”

We interviewed Evie last year about her plans for the book, read the interview here.

For press inquiries, visit the Contact Us page to reach the right 33 1/3 staffer.