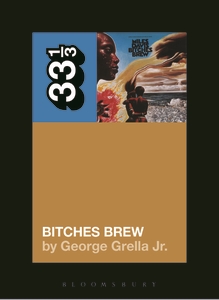 We are super excited to announce the upcoming release of one of our two October titles, Miles Davis’ Bitches Brew by George Grella Jr.!

Bitches Brew is still one of the most astonishing albums ever made in either jazz or rock. Seeming to fuse the two, it actually does something entirely more revolutionary and open-ended: Blending the most avant-garde aspects of Western music with deep grooves, the album rejects both jazz and rock for an entirely different idea of how music can be made.

Check out our Q&A with George from last year for more info about him and the making of the book.

For your reading pleasure, we’ve also included an exclusive excerpt below from the forthcoming book. As Picasso was to art and Stravinsky was to classical music, so was Miles Davis to jazz. Because of him, jazz music will never be the same.

It is a uniquely twentieth-century phenomenon for an artist to be a major practitioner of one style and concept in his particular medium, then to create a new style that changes the history and direction of that medium, then do it yet again, and, even more, to lead each new style, to create enduring, exemplary masterpieces in it. Picasso did it. Stravinsky did it. Miles did it. His achievement as an artist is equal in stature to theirs, the only real impediment to acknowledging this has been that Miles’s medium, jazz, was for decades seen as low-class, pedestrian, vulgar in all the wrong ways by the cultural powers-that-be. Miles cared about that, but also didn’t give a shit, because, like Picasso and Stravinsky, his art reached a broad audience, one far outside that typical of his genre. But then, his genre was music.

Modern painting, classical music and jazz are actually impossible to imagine without Picasso, Stravinsky or Miles. No painter had to work with cubism, no composer had to write in the neo-classical style, no jazz musician had to abandon bebop or hard bop for modal harmonies. But cubism, neo-classicism and modal jazz were all in the vanguard of their respective mediums: keeping their traditions moving forward, adding to the accumulation of knowledge, and the continued vitality and relevance that was the direct effect of these three artists was a boon to every other painter, composer and musician around them.

Another commonality for these three men was that they found their ideas and made their breakthroughs not via theory but praxis, through the constant discipline and effort of paring away the superfluous to discover their own purest sense of beauty. As intelligently as each could express their artistic values, none were philosophers or conceptualists. They were working artists, selling and gigging. Stravinsky described a process that was true for each, eschewing the idea of inspiration and instead explaining that being a composer meant spending the time and energy writing music. Through that very process of work, he not only honed his craft, but ended up producing music he never intended to write, discovering its value and using it to create masterpieces, all of which was the residue of the design of work. It is also easy to discern consistent techniques and aesthetic values through their careers, through each change in style: a basic love of figurative painting for Picasso, powerful rhythms and short, repetitive units for Stravinsky, linear development and a constant search for the simplest means possible for Miles.

The history and cultural position of jazz, however, is entirely different than that of painting and classical music. It was born in the twentieth century, built its own traditions on the fly, and came of age as a modern art along with Modernism. Jazz also began and thrived as an essentially commercial genre—there was an art and an artistry to it, and it has always demanded extraordinary musicianship, but it worked by entertaining the public and by making them dance, and for good or ill, the music was made in dance halls, restaurants, speakeasies and whore houses—that underwent a startling metamorphosis into an art music, as abstract in form, structure and intention as any string quartet by Haydn. Nothing else has achieved this.