TO CELEBRATE THE UPCOMING RELEASE OF OUR 110TH 33/13 ON  BITCHES BREW, WE’RE PLEASED TO BRING YOU THE THIRD INSTALLMENT OF MILES DAVIS WEEK BY AUTHOR GEORGE GRELLA JR. ! 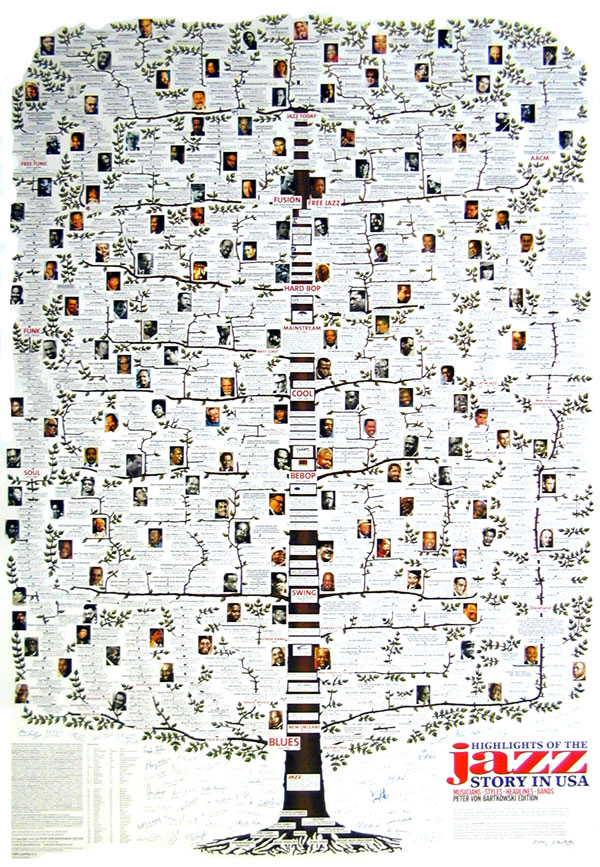 Jazz history is the story of musicians and bands and the records they made, and it can be charted as a family tree. Jazz is an oral tradition, and even though it has now been heavily institutionalized (fundamental to the music’s economic survival, but not necessarily an aesthetic benefit), it remains so, and is pretty much the only still-living thing we have in the West that approximates the Homeric tradition.

From the very beginning, musicians led bands and made records, and the sidemen went on to lead their own bands and make their own records, and on and on. Miles is arguably unequalled in his importance as a bandleader in jazz history, going by his sidemen and collaborators: Lee Konitz, Gil Evans, Gerry Mulligan, John Lewis, Sonny Rollins, Jackie MacLean, Milt Jackson, Thelonious Monk, John Coltrane, Bill Evans, Cannonball Adderley, Herbie Hancock, Tony Williams, Ron Carter, Wayne Shorter, Joe Zawinul, Dave Holland, John McLaughlin, Keith Jarrett, Gary Bartz, Dave Liebman, Al Foster—merely a sampling of the major musicians who came through his ensembles.

New generations of musicians also listen to the records of their predecessors and emulate them to learn how to play jazz. Every jazz musician worth anything has transcribed solos by the musicians they admired and practiced them, it’s an essential part of the learning process.

But the process is supposed to get you playing in your own style, with your own voice, not to produce an imitation of the original. There is a lot of imitation in jazz, though, especially when you look at the influence of titanic figures like Miles Davis. The force of Miles’ musical personality can be so great that it’s impossible to find one’s own personality outside of it. That’s an understandable problem.

What I cannot understand, and find pernicious, is imitation in the guise of tribute. The tribute concert and album has been a part of jazz for decades, and most of these are mistakes of one kind or another. They are the well-intentioned attempts to honor one’s predecessor, so the musicians play the music that the figure they honor made famous, and the combination of respect and influence makes for safe and dull music that is easy to praise but gets jazz, and the musicians, nowhere. Because the honor goes to a great, it comes off as churlish to criticize the results, but making music like that is a cop out.

Especially in the case of Miles Davis. Honoring him means honoring his values: imitating his sound, the way he played, the records he made, dishonors everything he stood for, which was never to repeat yourself, don’t do what everyone else is doing, and especially don’t do what has been done before. If you love Miles, if you love some of his records, don’t recreate them. Move ahead: as he told one fan who said he dug Miles’ earlier records but couldn’t get with the new stuff, “Should I wait for you?”

Keep that in mind, always, with Miles. Until his late comeback (mostly stylistically safe, but with moments of great, inimitable music), Miles never settled on past success, always took chances. Aesthetically, he put himself in harm’s way and always courted failure, nowhere as dangerously as with Bitches Brew. That he succeeded so often, and so extravagantly, is a powerful testament to his incomprehensible genius. As you listen to the playlist, think about the responses—some are safe, others have a personal voice and even court danger. Those are the ones that might’ve make Miles smile.