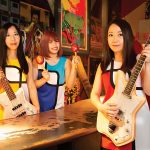 In my previous post I outlined some of the ways food permeates Japanese food and popular culture. In this one, I dig a little deeper into the connections between food and the Japanese language itself. As I mention in my book Shonen Knife’s Happy Hour: Food, Gender, Rock and Roll, rice has historically been considered central to the Japanese diet and as a food it is loaded with cultural meaning. Indeed, the word for cooked rice, gohan (ご飯), is synonymous with meal. 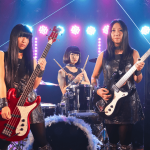 Most fans can agree on two facts about Shonen Knife: first, it’s impossible to be sad while listening to them; second, it’s equally impossible to not get hungry. Ranging from songs about savory ramen to sweet candies, Shonen Knife’s tunes work a synethesial magic on listeners’ tummies. Their forty-plus songs about food give new meaning to the phrase “musical taste.” But why does Shonen Knife have so many songs about food? I develop a couple of answers to this question in Shonen Knife’s Happy Hour: Food, Gender, Rock and Roll; one explanation is that food is a topic that all humans can relate to and take pleasure in, but that is not the only one. 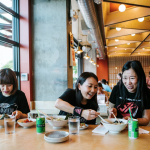 The Nissin Company, founded by Ando Momofuku in the early 1950s, rose to prominence with the invention of Cup Noodles instant ramen in 1971. Since then, instant ramen has become a prominent staple around the world and poor college students have spent weeks living off the savory soup-y meal. Indeed, Ando envisioned that Cup Noodles could help alleviate world hunger and bring about world peace. It should come as no surprise that Ando’s company is based in Ikeda, right next to Shonen Knife’s hometown, Osaka and now there is even a museum honoring Cup Noodles there. In Ikeda, the Osaka spirit of kuidaore or “eat til you drop” is strong. And like Ando, in Shonen Knife’s musical vision the optimistic belief that food can bring human beings together shines through.