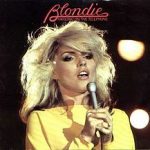 With summer now a hazy memory and October dragging into its 17th week, it is fitting to reflect on the moody album once described by Rolling Stone’s Arion Berger as “romantic fatalism”: Blondie’s Parallel Lines. I have been pining for the glamorous while exclusively dressing in well-worn athletic wear and never leaving home. Debbie Harry’s vocals, accompanied by a reading of Kembrew McLeod’s “gloriously revisionist history” (MTV News) of this album, offer a refreshing dose of allure.