Skip to content
You are here
Home > Posts tagged : Untitled" 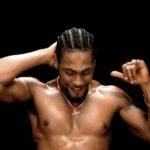 Inspired by our interview on D’Angelo’s Voodoo with Faith Pennick, it’s time to take a closer look at his infamous music video. The video’s featured song “Untitled (How Does It Feel)”won a Grammy Award for Best Male R&B Vocal Performance in 2001 and was named Rolling Stone’s fourth best single of 2000. There’s no denying the deep emotion that D’Angelo can’t contain when he croons this particular song, but I think we can all agree that it was the release of the music video that added new sexy, passionate, breathtaking layers and made his desire come alive.