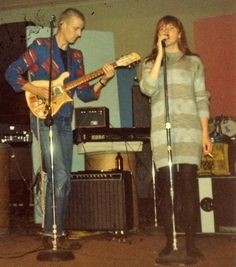 This video documents Young Marble Giants’ entire November 1980 performance at the Western Front in Vancouver. As far as we know, it’s the only footage of an entire YMG concert available online; this absence of documentation, makes their distinctive fashion style and stage presence (or deliberate lack thereof) entertaining and illuminating. Just two months later, in January of 1981, the band would officially announce their breakup—due to a culmination of longstanding personal tensions—but they appear completely at ease in this video, moving through a fifteen-song set of tracks from Colossal Youth, plus the newly released Final Day EP and older songs like “Ode to Booker T.”

In interviews throughout 1980, the band frequently mentioned tiring of the noisy dynamics of punk and rock clubs, expressing an interest in playing reverberant spaces like churches or even “rural places” where audiences might be more suited to experience the subtle atmosphere and detail of their quiet music. While YMG never had the chance to fully pursue these ideas, they might have felt more at home at the Western Front, an art space founded in 1973 known for mounting programs of performance art, video art, dance, and experimental music. The laid-back and all-purpose feeling likely would have reminded them of some of the provisional, DIY spaces they played in Cardiff like the Chapter Arts Centre (which also hosted film screenings) and the Grassroots Coffee Bar.

The Western Front’s lack of an elevated stage puts YMG on the same level with the quiet and respectful audience, but Stuart, Philip, and Alison mostly keep to themselves, rarely addressing the crowd and only briefly huddling together between songs to exchange a word or two. As with everything else when it comes to YMG, the smallest details reveal the most: Stuart tells the audience that the song “Choci Loni” is about a “fictitious cowboy”; Philip’s bass has the letters “YMG” inscribed in its top corner, and he dips down before each song to press play on a small cassette player that houses the pre-recorded drum machine parts. On display, too, are the group’s thrift-store style 1940s-style outfits—Alison wears a gray-striped sweater dress and a waxed army surplus jacket and Philip dons a plaid wool tie and traditional trousers. The videographer trains her attention on the band, never showing us the audience—whom we only hear quietly clapping at the end of each song. Are they dancing? Are they sitting down cross-legged on the floor? We don’t know—we just see Stuart, Philip, and Alison playing and singing songs for an hour. At the end, Alison says “Thank you,” and the three walk quietly out of the frame.