In this 33 1/3 Origin Stories, read about how authors Patrick Rivers and Will Fulton met, collaborated, and came to literally write the book on Camp Lo’s Uptown Saturday Night.

We each have a variety of musical experiences outside of reifying the energy of music into words, but we’ll save our middle school recitals for another time. Our research and writing collaboration began at a 2011 academic conference in Cincinnati. We were each in the midst of our doctoral studies at the same institution but had not met each other. Circumstantially, during different semesters we each had a professor that entertained our long-winded, impromptu, and unsolicited lectures (or soliloquies) on hip hop music and the brilliance of Prince. Those conversations always ended with the professor saying, “You know, you should meet Will,” or “You know, you should meet Patrick.” At the conference, we both attended a paper presentation on hip hop beat making. After the paper, we were the only two to ask a question of the presenter. While we had different questions, the gist of our inquiries was “where did you get the knowledge or information to make such a generalization about … ?”

Walking out of the paper session we started to talk (Will started the conversation, Patrick was putting on his headphones to continue listening to a Prince bootleg). At these conferences, all attendees wear name tags with their institutional affiliation. If there was bystander watching us that person would have had a glimpse of the moment when we each realized “This is that Will” or “This is that Patrick.”

Over the next year or so we would meet up and talk music. We were each adjuncts at Brooklyn College and shared a particular bond as married doctoral students. In 2013, we began collaborating on projects based on our academic research priorities and shared interests. We started with our appreciation of hip hop beat making and production. We had each been involved in hip hop production and between the two of us we had Technics turntables and an Akai MPC 2000XL. Thus, we created a lecture/demonstration about the development of hip hop’s music from turntables to the sampler.

In 2014, we were each fortunate to be offered tenure-track positions teaching music, but we no longer lived a train ride apart in Brooklyn. Collaboration continued through Google Docs, exhaustive conversations about the latest records and academic works, and musings kicked around through text. By 2015, we were each a parent, enjoying academic life but keeping it in context of being family men.

In late-January 2015, we had this text exchange: 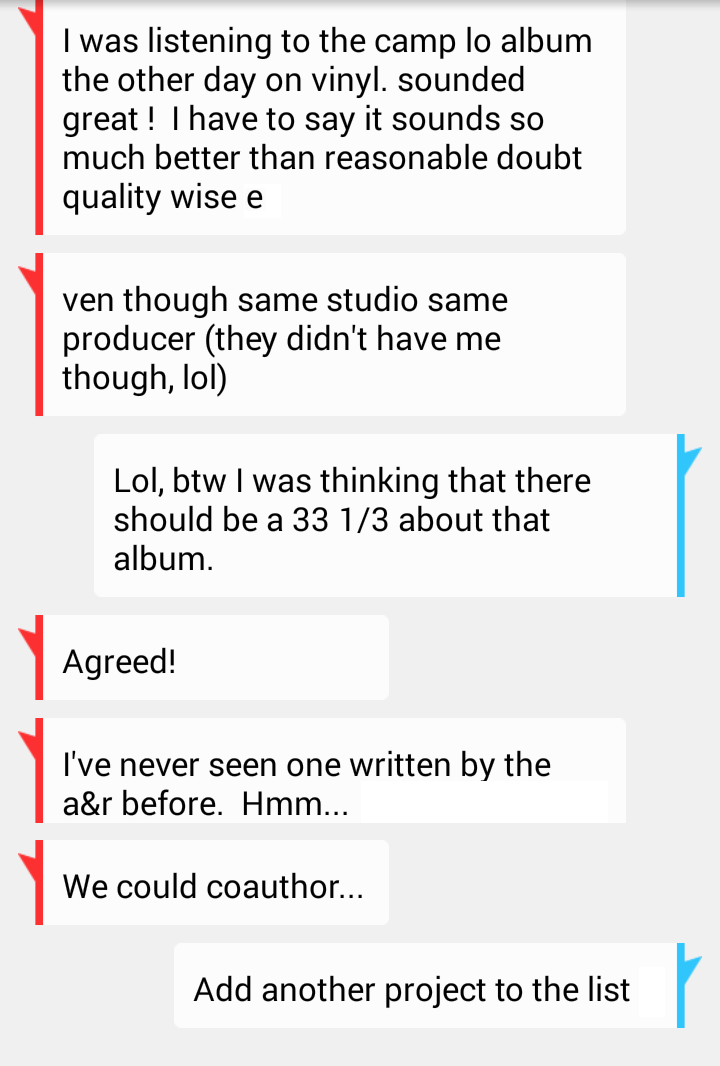 In April, the call for a new round of 33 ⅓ entries went up.

We had discussed Camp Lo and Uptown Saturday Night a lot. Particularly, the evergreen sound of “Luchini” and how much the album awkwardly fits into the narrative of mid-to-late ‘90s hip hop. We had an appreciation for the style of 33 ⅓ book in which the author discusses their relationship with an album and briefly considered writing more about the role and function of the record in our personal lives. In addition, the 33 ⅓ entries where the author contextualizes the album using social theory and/or second-hand sourced quotes also appealed to us. During the proposal stage, though, we decided to do a first-hand sourced, oral/social history of the album where all consultants discussed their role in the production of the record but also their relationship to Camp Lo and the record making process and to their consumption of the final product.

Typical of our collaborative efforts (remember, we are husbands, fathers, producers, and voracious music listeners), our proposal was submitted as the deadline clock ticked to zero but before midnight. Perhaps due to our late night—but not late—submission, when the seemingly endless list of proposals was posted on 333sound.com our proposal was not included. After a follow up email, we were added. On November 4th, 2015, we were informed that we were selected and on November 6th, we met up in Yonkers, NY to interview Ski at his studio.

Seven months of in-person, one-on-one, and conference call interviews, transcription, and infrequent, non-sequential writing sessions led to two months of intense writing to complete the first draft of the book. During this period we also finish some academic works on Public Enemy and Prince that have been published and individually presented other research at academic conferences.

With the publication of the Uptown Saturday Night 33 ⅓, we mark the end of a phase of our collaborative work. Like a young band that imagines and sketches out their first three albums and the venues for their first world tour, we have sketched out the next phases of our work and hope to have future interactions with the great people at Bloomsbury and hope that everyone that reads this blog or our book continues to check for our future projects. 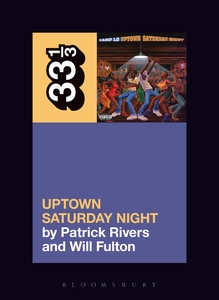 -Will Fulton and Patrick Rivers

Read more about Camp Lo’s Uptown Saturday Night on Bloomsbury.com (currently available for 30% off through the month of September!).