Andrew W.K. is attempting to break the world drumming record for longest drumming session at a retail store. It’s happening in Time Square which happens to be right near the Bloomsbury offices so I’ll see you there!

OMusicAwards.com and at the Oakley Store in Times Square, New York City (northwest corner of Broadway and 44th Street). 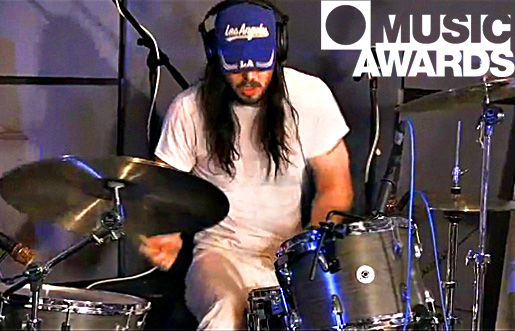 You’ll have to wait until January to read Phillip Crandall’s brilliant book on Andrew W.K. but in the meantime here’s the preface to wet your appetite.

From Andrew W.K.’s I Get Wet by Phillip Crandall, publishing January 2, 2014

Andrew is standing on his Los Angeles kitchen floor, but he could topple over in a projectile-heaving daze any second now. Seeing his wobbly reaction playing out exactly to script, Wendy Wilkes is ready with Step 2 of her devious master plan.

As a girl growing up in Northern California’s Bay Area, Wendy spent 360-some days of her year ticking off boxes until the next Walnut Festival. Commencing as summer turns to autumn in Walnut Creek, the festival officially celebrates the beloved crop whose groves replaced area vineyards during Prohibition. Whatever the reasoning, it was young Wendy’s opportunity to enjoy rides that only got more twisty, twirly, and exciting with each passing year. Wendy went on to study English during the Lew Alcindor-era at UCLA and, after graduation, train as a paralegal during that profession’s infancy. There, she met Jim Krier, a professor of law who would later co-write the preeminent casebook, Property. In Jim, she would find love, happiness, and a life confined to lame merry-go-rounds.

“I quickly found out that this guy was not going on any ride with me ever unless it stayed on the ground,” Wendy says. “I was doomed.”

So when Wendy gave birth to Andrew in May 1979 — “I was delighted to have a son,” Jim says, (and) I went home and told the dog we had a boy in the family, then three hours later went off to teach” — the mother saw, amongst many adorable first-child traits, a partner in rollercoaster-riding. Shortly after Andrew learned to walk, Wendy put her plan into action.

Wendy led Andrew into the kitchen and picked him up, placing her arms under his tush and his arms around her neck. Holding his body tightly against hers, she began twirling around, hoping some vertigo would shake his equilibrium to the diaper-donning core. After three or four intense spins, Wendy bent down to stand Andrew up on the kitchen floor.

If body language is any indication, this kid has no clue what’s happened or why his body is responding accordingly. He looks to his mom, who, as the spinner, created this internal mayhem and perhaps has an explanation as to why the dishtowels are waving. In this instance, the dosage of spin needed to carry out Step 1 — getting a toddler dizzy — would not impair the spinner’s ability to carry out the second and most important step of this plan.

Allowing for the dizzy effect to make just enough of an impression on the young brain, Wendy looks Andrew in the eyes and, in a gesture quite opposite to bringing him to barf’s edge, lays some comforting mother-voice on thick.

The child, reassured by his mother’s acknowledgement and approval of the feeling, laughs.

“Don’t you love that?” The child, not unlike one who falls but cries only upon being coddled with sad reactionary faces, laughs some more. “Do it again!” Andrew commands.

The plan has worked. Little Andrew yearns to push the limits of dizzying intensity again and again in that kitchen. As boxes keep ticking, they take the game to their new kitchen in Ann Arbor, Michigan. From there, they’ll take it outside, where Wendy will hold Andrew by the outstretched hands and spin until the earth blurs below.

“Isn’t that even more fun,” she asks. “That’s so much more fun than twirling with Mom holding you! You can twirl way out there really fast.”

The child, instinctively now, laughs some more. And when the child gets a baby brother, Wendy will repeat the process. “Each boy, same thing,” Wendy says, proud of her efforts and thankful for a life not spent on merry-go-rounds.

“They are perfect. They go on everything.”