To celebrate the upcoming release of our 102nd 33 1/3 on  Ode to Billie Joe by Tara Murtha, we bring you the third installment of Bobbie Gentry week.

When “Ode to Billie Joe” was released in the summer of 1967, everyone wanted to know more about Bobbie Gentry, the beautiful girl who became famous singing a spooky ballad about Billie Joe McAllister jumping off the Tallahatchie Bridge. Like the song itself, it seemed Gentry came out of nowhere, a country girl who strolled into a Los Angeles recording studio with a guitar on her back and a dark tale to tell.

Like most overnight sensations, Gentry’s fame was an opportunity that knocked only after long years of hard work. As Gentry often told reporters, she began singing professionally when she was 11 years old, and moved to California when she was 13 years old. In college in Los Angeles, she studied music composition, art and philosophy.

Even though these details of her biography were recounted in early profiles written about Gentry, she had what you might call Patsy Montana problems. Even though she was a multi-instrumentalist who wrote sophisticated lyrics that drew comparisons to William Faulkner, reporters often marveled that, in person, why, Bobbie Gentry didn’t seem like a hillbilly at all. In fact, went one particularly illuminating headline, if Gentry didn’t have a “Miss America measurements,” you might even call her an intellectual.

In the years following Ode to Billie Joe, Gentry worked to dispel any lingering notions that she was some kind of hillbilly pin-up who stumbled into fame on bare feet and a stroke of luck.

“Maybe people have the impression that… I just sort of, arose out of a swamp fog and appeared on television,” she said many times, on stage and on late-night television shows.

Enter this photograph snapped in 1962. 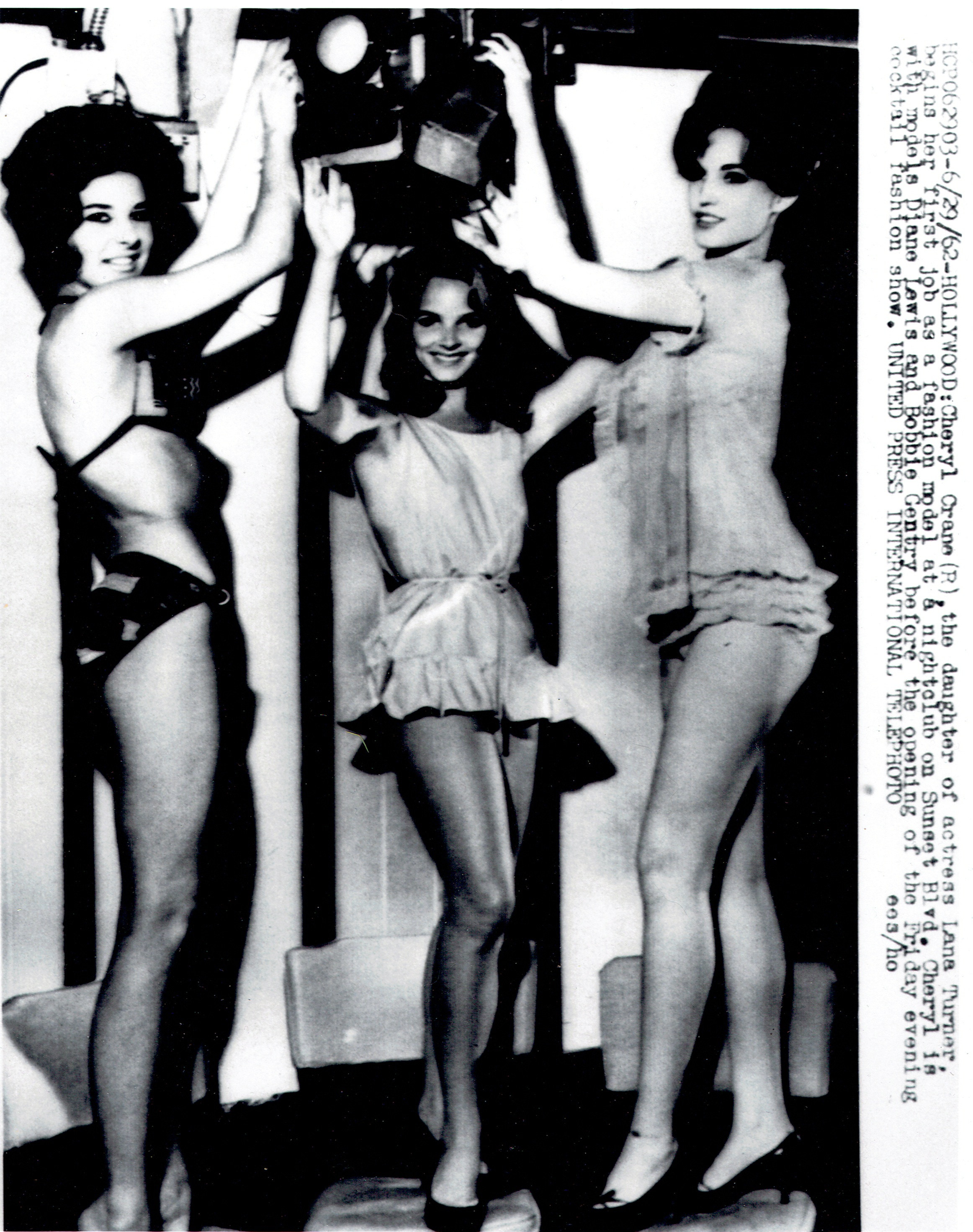 It’s a truly remarkable photo, not only because it is a rare bit of visual evidence of Gentry’s early years gigging in Los Angeles, but because of why it was taken. This photo wasn’t snapped because Bobbie Gentry looked good in a two-piece, though she certainly did. The only reason the photo exists is because of the smiling girl in the center.

These days, Cheryl Crane is a writer and real estate agent in Palm Springs. But in 1962, Crane was a wild child who initially found notoriety as a key player in one of Hollywood’s biggest scandals: the murder of Johnny Stompanato.

Cheryl Crane is the daughter of film star Lana Turner. In 1958, four years before this photo was taken, Lana Turner was dating Stompanato. In Crane’s memoir Detour: A Hollywood Story, Stompanato is depicted as a low-rent Mafioso kind of guy who, unbeknownst to her for a long time, was also a verbally and physically abusive gigolo.

The tragic evening took place the evening of the 30th annual Academy Awards. Stompanato wanted Turner to escort him to the gala as her date, but she brought her daughter and mother instead. It was a delicate time, professionally, for 37-year-old Turner, who was making a comeback of sorts after starring in the 1957 drama Peyton Place.

At the podium, Jimmy Stewart introduced Turner, who made a grand entrance in a tight white mermaid dress and dazzling diamond necklace. When Stewart turned to leave, Turner grabbed his arm.

“Oh, why, you nervous?” quipped Stewart.

“No,” said Turner, visibly shaking behind her smile. “It’s just that I like you.”

Watching the clip, it’s almost as if Turner just couldn’t shake the feeling that Stompanato was out there somewhere, growing more enraged by the minute. It’s almost as if she knew something terrible was going to happen.

That night, after the women returned home from the awards show and after Cheryl went to bed, Stompanato physically attacked Lana Turner. He threatened to slice her face with a razor blade.

Crane, 14 years old at the time, listened to the commotion erupting behind her mother’s bedroom door. It was confusing. Turner had kept Stompanato’s violence hidden from her daughter and, like many abusers, Stompanato had, up until that tragic night, successfully concealed his tyrannical rage behind a cloak of charisma.

Crane, terrified, sprinted down to the kitchen and grabbed a knife, then ran back toward her mother’s bedroom door. The exact dynamics of what happened next have been disputed for decades, but what’s a fact is that the blade sank into Stompanato’s chest, and he bled to death on the floor.

Crane was arrested, and total chaos ensued for the family. 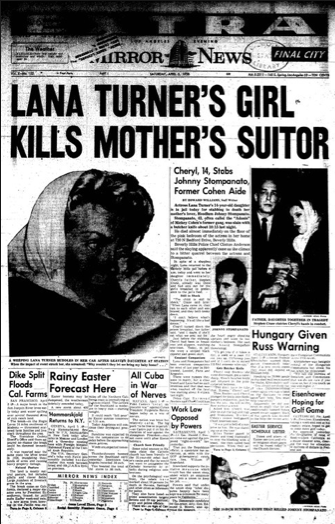 Ultimately, the killing was ruled a justifiable homicide. The trauma of the incident and its aftermath, however, caused Crane’s young life to unravel, with tabloid photographers capturing every lowlight under the camera’s bright flash, making everything worse. Eventually, Crane was forced into an institution, where she had to stay until she was 18 years old.

Crane was released in April, 1962. “With nothing to do, I took up the pastimes of a Hollywood brat,” Crane wrote in her memoir. “I took long lunches a La Scala and crashed the guests-only pool at the Beverly Hills Hotel. My cohorts on such adventures were usually two new chums, a one-time roommate of mine at Sacred Heart Academy named Diane Lewis and her friend Bobbie Gentry.”

The modeling gig was Bobbie’s idea. She heard a new joint called The Summit was hiring models to pose for lunchtime fashion shows. The manager explained they were going to model for a “businessman’s lunch type of thing.”

During a dress rehearsal, a gaggle of photographers and reporters suddenly flowed through the front door. The club manager had called the tabloids, which were not done chasing the storyline of Lana Turner’s notoriously troubled teenage daughter. The photo ran on the evening news and the morning papers.

Crane was humiliated. Here she thought she was embarking on an adventure all her own, and didn’t realize she was hired because of her notoriety. Crane’s father, a one-time actor and well-connected restaurateur, made some calls. The club didn’t open the next day. The girls never got to do the gig.

Five years after this photo was taken, Diane Lewis, the third girl in the photo, was dead of an apparent suicide. Cheryl Crane had transformed herself into a successful restaurateur, and worked with her father. And Bobbie Gentry was one of the biggest stars in the country.

When Ode to Billie Joe was released, fans couldn’t get enough of Bobbie Gentry, the mysterious Southern dark-eyed beauty. Life magazine photographers eagerly trailed Gentry back to the Mississippi farm where she was born, and snapped photos of her shopping in the general store, staring pensively at the rushing water beneath the Tallahatchie Bridge, dining on butter beans and cornbread with her grandparents.

She posed barefoot in trees and sang songs about the South, about the peculiar way Southerners processed tragedy, about hard it is to know how anybody else is feeling, even when you’re looking right at them across the dinner table. By 1967, no one remembered the other model in that once-notorious photograph of the young murderess Cheryl Crane.

Two book release parties for Ode to Billie Joe are going down Friday, December 5. Get tickets for the evening show at Underground Arts here, RSVP for the WXPN Free at Noon here, or listen online Friday at noon here.