Skip to content
You are here
Home > 33 1/3 > Excerpt: Phish’s A Live One by Walter Holland, Coming in October! 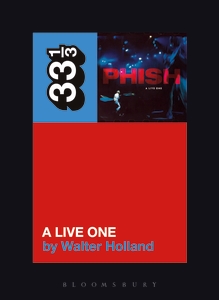 We are super excited to announce the upcoming release of one of our two October titles, Phish’s A Live One by Walter Holland!

This book considers the music and moment of Phish’s ecstatically inventive 1995 live document, a mix of weirdo acid-psych, ambient moonscapes, vaudevillian Americana, and riotous arena-rock energy, all filtered through bandleader Trey Anastasio’s screwball compositional sensibility and the band’s idiosyncratic approach to spontaneous group creativity. It places Phish and their fandom in historical and cultural context, and picks apart the mechanics of their extended group jams. And it examines the mystery of how a quartet of nice boys from Burlington, VT could have been, all at once, one of America’s biggest touring acts and one of its best-kept secrets.

Check out our Q&A with Wally from last year for more info on the author and his writing process.

Just in case you’re not quite ready to take the Phish bait yet, we’ve also included an exclusive excerpt from the book below! This was taken from the author’s description of the improvised jam in A Live One‘s “Harry Hood” track. The chapter opens with the words “Let’s talk about a moment for a moment.”

There’s a lead voice, the guitar, but this isn’t a solo: they are coming to an improvised arrangement, coherent as any written passage, never again to be duplicated. Architecture in motion. Flocking. That’s the game.

Ten minutes into the track, they’re soaring: ringing open-string guitar, piano fistfuls, tummy-rumbling bass moans, at least fifteen limbs bashing away at the drums. For sixty seconds the music is at a climax, big and loud. Rawk. We’re basically done—in five improvised minutes they’ve worked a fresh variation on the song structure and ramped up to the final vocals. Plenty of folks would follow a band around the country if what they did every night was the first eleven minutes of this “Hood,” and—

—but they turn back. Sharing a destination but lacking a map, all four players instinctively pull up and halt the jam short of the finish. Drums and bass drop out, the road ends … and then a deranged blues-guitar thing happens, a goblin-drum thing, a bottom-string bass thing, a how-did-he-get-quite-there piano thing. The music, as the saying goes, is playing the band. From this point until the end of the track, anyone’d be proud to have written music so purely joyful and rich. It comes and goes in minutes, departing from the songform in order to fulfill that form. The term “leap of faith” seems appropriate. Maybe your heart speeds up a little here, to hear; maybe theirs did too on that night. That’s a nice thought, isn’t it? Hearts beating in shared time. Music is a technology for synchronizing the movement of animal bodies.

And that there is the thing itself.

(This stuff happens all the time, it’s how the species survives, but there it is on record if you like, 11:20 disc two track four A Live One released 1995 on Elektra. By all means take a listen.)