Rachel Lee Rubin takes us inside Merle Haggard’s career, the controversy and innovation of Okie from Muskogee, and the mark Haggard left on country music.

In this post I want to introduce my book about Merle Haggard’s most controversial album, Okie from Muskogee: Live from Muskogee, Oklahoma, an album noteworthy above all for the way its title cut energized numerous important national conversations. Almost exactly two years ago Haggard, a Bakersfield country music legend, died on April 6, which was also his birthday. It struck me that I might use this coincidence of celebration and grief, of beginning and ending, to discuss here three things Haggard initiated over the course of his career, and three things he ended. Indeed, one of the things that drew me to writing about the album that introduced the song “Okie from Muskogee” is what striking example it is of the work music does—as I have, in frustration, made my students stand up and chant on more than one occasion, “There is no such thing as “‘just entertainment’!” 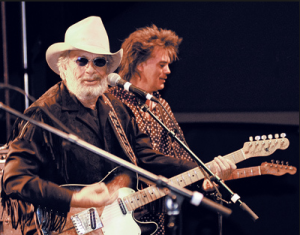 Haggard started a new tradition in commercial country music: the singer playing the role of autobiographical hero. There were hints of this before Haggard’s moment in the career of Jimmie Rodgers, who recorded, for instance, songs about dying of tuberculosis. But after rural Southerners moved in droves to cities and out of the South, representatives of their group identity were needed—and called into being—by country music’s fan base. When Haggard became a prominent figure in country music is after he began to narrate his life in his songs, fairly early in his career. He recorded songs about his family’s experience in labor camps, about his time (multiple times, actually) in jail and prison, about the loud club scene in Bakersfield, California, where he was born and where a hard, loud, rude counterpart to the polite Nashville country scene originated. This is when his career took off.

Haggard also introduced into commercial country an explicitly anti-racist songbook. He wrote two songs, for instance, about lovers in interracial relationships, persecuted by racists. “Irma Jackson” is about the white singer’s relationship with a black woman that is tragically ended by the woman’s fear. (Haggard wanted this to be the follow-up to “Okie from Muskogee,” but his record label refused and it came out later.) Similarly, “Go Home” is about racists forcing the singer’s lover to move back to Mexico. Particularly resonant in our moment is Haggard’s 1978 song “The Immigrant,” which mocks wealthy white landowners for exploiting the labor of undocumented Mexican workers and then deporting them—until they are needed again. The song also notes that they are working on land that has been stolen from Native Americans.

In a related move, Haggard was notable for bringing jazz into his country songs, thereby refuting the structuring racist logics of the recording industry. This led to his being the first country musician to appear on the cover of the jazz magazine DownBeat, with an accompanying article that referred to him as a “country jazz messiah.” Many of Haggard’s songs have honking horns; one of my favorites is “Am I Standing in Your Way.” Haggard linked his prison time to learning about a range of instruments and musical traditions—and also his experience picking crops as a young man, when different groups of workers sang different kinds of music. He spoke of his love of jazz throughout his life. 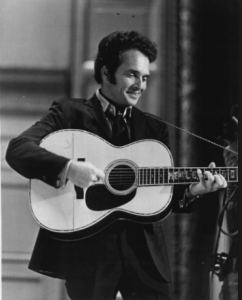 In an important indication that anti-fandom can be as shaping as fandom, “Okie from Muskogee” introduced a new generation of parody in the multiple response songs it envoked. For the most part, these songs took the original quite straight, despite numerous indications that it is a parody (my favorite sometimes being that Haggard—who made it through a total of 9 days of high school—cracks up a tiny bit when he sings the line, “The kids all still respect the college dean”). With impressive efficiency, Bob Dylan has noted that nobody would take the song at face value if Randy Newman had recorded it—but the various parodic versions are instructive in what they assert. And what they assert is mostly insulting to Southerners for being simpleminded, although, of course, Haggard is from California, and his music is quite modern-sounding and sophisticated: the instrumental introduction to “Okie” alone is an excellent example of the latter.

Of course, Haggard did not only kick off some important new creative modes; he also helped bury some pernicious traditions. For many people, he ended the scornful defining of “Okie” from outside—a discriminatory process presented famously, and condemned, in John Steinbeck’s Grapes of Wrath. This created a fan group who took the song as a proud assertion in addition to the haters who took the song as an obnoxious assertion. Fascinatingly, and tellingly, the fan group who took the song at face value and were grateful to Haggard as a result tended to be working-class, while the haters tended to be middle-class and frequently used class markers to mock the song. Perhaps the rudest example of this is the most efficient: Kinky Friedman and his Texas Jewboys assert that “rednecks from the South” fuck sheep and drink cheap beer, among other things, in his parody of the song, “Asshole from El Paso.” 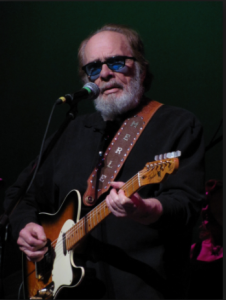 One of the most valuable contributions Haggard made, and an important extension of his many, many songs about class and work, was that in a range of ways and locations, he ended the fantasy separating the musician from the laborer, and the creation of music from work. Instead, he worked hard (sorry, couldn’t resist) to connect the two. So in addition to portraying workers and jobs repeatedly over the course of his career—including, as I mentioned above, the exploitation of undocumented workers, but also a sympathetic song about a sex worker, songs about truckers, songs about migrant workers in labor camps, songs about factory workers, and many more—Haggard found numerous ways to introduce songs as work, and not just songs about work.  He wore a hard hat and carried a metal lunch bucket on a record cover, for instance. He gave albums titles that included a version of the word “work.” He produced an album on which he chats with band members to introduce the songs, overlaying picking cotton and picking guitars (among numerous other assertions of music as work). He introduced a guitar solo by declaring, “Here comes that workin’ man!”

Over the course of his career—it became easier, of course, once he was well established—Haggard ended various mythologies about him. (At the very least, he tried to end them—we’d be kidding ourselves if we didn’t acknowledge that they have staying power.) Late in his life, released a music video with famous country-stoner Willie Nelson, in which they both smoke pot, and recorded a version of “Set My Chickens Free,” a song about LSD (though he rather slyly changes the lyrics as a possible cover story, replacing “LSD” with “Vitamin C”—another piece of drug slang, but one he could assert he took at face value). He wrote a song about how we need a woman to be president. He recorded a Woody Guthrie song for a Michael Moore movie about capitalism. He publicly opposed the Iraq War.

Finally, just as Haggard was born and died on the same date, he began—and ended—in “Okie from Muskogee” the use of the phrase “leather boots are still in style for manly footwear.” I think we should be grateful for both.

Merle Haggard’s Okie from Muskogee is out now! Purchase your copy here.