Skip to content
You are here
Home > Article > Siouxsie and the Banshees Week: Day 4 – “Peek-A-Boo” Part 2

In her final post, Samantha looks at the influence that silent films had on the music video for their critically acclaimed song, “Peek-A-Boo.”

Peepshow features numerous references to silent filmmaking, particularly its technical facets, including the use of light and shade and vignette. This influence extends into the ‘Peek-A-Boo’ video, particularly in the way that Siouxsie and The Banshees are depicted as separate protagonists. Sioux is a leading lady, the focal point of the video and the dominant protagonist. This is nothing unusual but, even though the video is full colour, the Banshees are depicted in Weimar-era dress and performing vaudeville throughout. One particular scene depicts the Banshees in shadow play, their silhouettes casting lengthy top-hatted shadows across the screen. 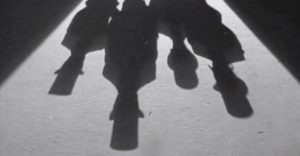 This separation of a female protagonist from a grouped-male supporting cast was widely prevalent in silent film, a good example being Dr Jekyll/his male co-stars and Gina in John Robertson’s Dr Jekyll and Mr. Hyde (1920). This film – a known influence on Siouxsie and the Banshees – featured multiple scenes of the grouped male cast and Gina’s solo performances separated on screen, which is clearly mirrored in ‘Peek-A-Boo’s video. 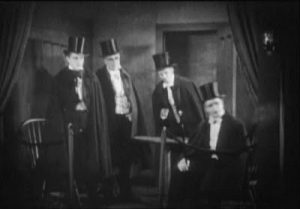 Above: Jekyll and friends attend a night out in top hats and cloaks. 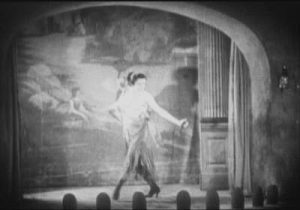 The influence of Pabst’s Weimar classics Pandora’s Box (1929) and Diary of a Lost Girl (1929) – in particular, the performances of Louise Brooks as Lulu and Thymian respectively – on Sioux is well documented. From a technical perspective, this influence is also present in the ‘Peek-A-Boo’ video. Film scholar Margaret McCarthy noted of Pabst’s framing of Lulu in Pandora’s Box, ‘In many…shots her head exceeds the filmic frame, as if Lulu’s countenance could only be partially contained.’ This extreme close up technique is mirrored in ‘Peek-A-Boo’ with regular shots of Sioux’s face from different angles and through vignette. 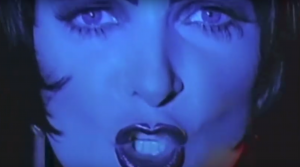 There are numerous other film influences in ‘Peek-A-Boo’ and its accompanying video but, lastly, there’s an obvious nod to Jim Sharman’s Rocky Horror Picture Show in the way Sioux’s red-lipsticked mouth and contrasting bright white teeth flash before the screen. This may also be a homage to Dalí’s ‘Mae West Lips’ sofa sculpture, but more likely references the opening credits to Sharman’s cult classic and the faceless lips hovering in the opening scenes with the song ‘Science Fiction/Double Feature’. 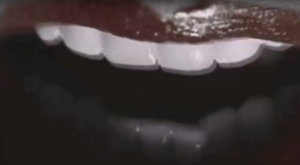 Above: Extreme close-up of Sioux’s red-lipsticked mouth in ‘Peek-A-Boo’.

Below: Magenta’s faceless mouth in the opening scenes to The Rocky Horror Picture Show (1975).