Happy Andrew W.K. Week! No. 89 in the 33 1/3 series delves into Andrew W.K.’s debut album, beginning with the classically trained child who embraced extremity and diving into the making of I Get Wet, his ultimate party invitation. Here, author Phillip Crandall shares what his midstream mindset was in trying to balance untainted passion for the music with the perpetually wild genius of that music’s creator. 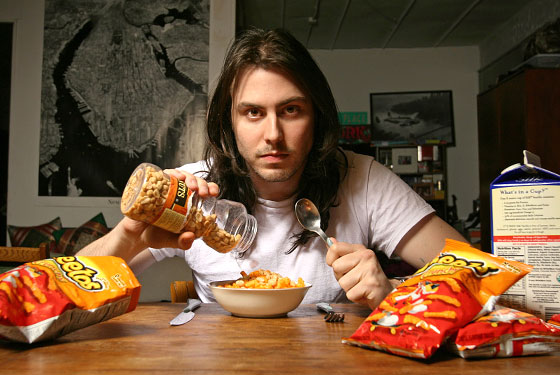 I had already heard about the fake cease-and-desist letter Andrew W.K. created when he was a teenager — the one where he pretended to be R. Crumb’s lawyer and used his skills of legalese and recreating postage cancellation marks to strike fear in the heart of a local record shop proprietor whose store logo was similar to R. Crumb’s Eggs Ackley character. One label-running friend of Andrew’s confirmed the story of how Andrew pretended to be a Japanese music distributor ordering $14,000 worth of 7-inches and cassettes, complete with a fake check. Another friend told me he will receive the occasional lovely email from Andrew with an innocent memory — say, of the two of them at a baseball game — along with a photo of them from that event. The friend won’t be able to place why the picture makes him uncomfortable until he studies it long and hard and figures out what physical insecurity Andrew has picked up on and exaggerated ever so slightly, ever so brutally via Photoshop.

These stories — and more, but these are just the ones that didn’t make my manuscript’s final cut — were pogoing around my head as Andrew invited me to his friend’s concert that night and read off some new Brooklyn address where the show was being moved to–an address that contradicted multiple online sources, including that friend’s Facebook page.

We were wrapping up the second of two extended interview sessions that Andrew had — and I can’t emphasize the kindness behind his time-giving generosity enough — graciously granted me that winter weekend (to say nothing of the numerous phone interviews he continued to make himself available for). We had met at a Manhattan midtown pub the day before; he in a black leather jacket, red flannel, and Maggot Brain shirt, and me in some maroon tee beneath my ubiquitous green track jacket. Over the course of a few drinks, we chatted about our families and art’s ability to uplift and a dream I had about him growing a Ron Mael mustache for the purpose of ripping it off to recreate the I Get Wet cover … then we crossed the street for a quieter bar he had recently discovered. As far as my work was concerned, that first in-person session was as fruitful as it was all over the place, covering his New York City beginnings and some of his friends credited on the album. While passing around the CD to discuss a particularly hilarious liner credit, my jewel case with the broken front lid cracked even further. (“That’s classic,” he told me. “What I like is that they still lock together.”) Later that night, I kicked myself for not using those lighter moments to bring up the topic I was most anxious discussing.

“One early Andrew quote that stuck with me (which I never did find room for in the book, sadly) was about how if you go at everything in life full-bore, you’re bound to get wet.”

Without taking away from the book, its “revelations,” or the many anonymous websites counting on your page-views to keep the controversy percolating, there’s a name in those liner notes that I wasn’t looking forward to speaking aloud. One of my earliest goals was to avoid it entirely if the I Get Wet story didn’t need it. As I interviewed so many collaborators and AWK friends who offered (unsolicited) insights on the matter, I came to understand the relevance of that name and its collateral controversy. And if I were to ultimately type that name for all to read, I would absolutely have to say it before Andrew himself. My anxiety wasn’t out of fear of an immediate negative reaction, but of a long-term stonewall reaction–one that would keep so many other vital stories and details from ever seeing light.

Out of nervous negligence, I wore the same maroon and green that second day; I can only speculate as to what Andrew’s reasons were for arriving in the same blacks, reds, and Funkadelic. We tied up the previous day’s loose ends, talked about the instrumentation and studio-work behind the album, and, yes, got into the relevant Steev Mike matters. All questions that needed to be asked were; most of them were even answered, though the only response I’ll give away here is, “The fact of the matter is that it doesn’t really ultimately impact hopefully too much in the big picture.” Immediately, I felt foolish for thinking a couple outside-my-own-delicate-comfort-zone questions would ever sway a super-rad, beyond-helpful, friendly, and above all professional gentleman like Andrew W.K.
About a half-hour later, Andrew informed me of his friend’s change of venue.

One early Andrew quote that stuck with me (which I never did find room for in the book, sadly) was about how if you go at everything in life full-bore, you’re bound to get wet. Wet from the blood, wet from the sweat, or wet from whatever other applicable fluids. When I met Andrew’s parents a month earlier, his father actually used the phrase “get wet” in a non-album-quoting capacity, describing how, for Andrew, it took drive and desire to work alongside destiny. (“If you don’t step outside,” he said, “you never get wet.”) His mother went so far as to say Andrew strives to put himself in uncomfortable situations in order to achieve that fullness of life. 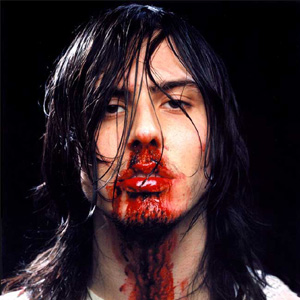 For me, the moment shortly after 10 p.m.–exiting an L station in Brooklyn that’s a full three stops farther than I’ve ever exited the L before, having to commit to one of two unfamiliar locations a mile apart from one another–was less a moment of uncomfortable truth than it was a moment of thrilling ecstasy. I was finally handed the opportunity to choose paved-path reason or insane uncertainty in this voyage, and I was all too happy to follow the unsafe unknown, both embracing and damning whatever sweat or blood may ensue. As random destiny would have it, a voice called my name within a minute of heading insanity’s direction. It was that of my friend Harold. (Note: Not his real name, but I wouldn’t want to be accused of dropping names for the sake of Google hits.) I had first met Harold when I interviewed him for what became my most beloved magazine clip; his friendship and radness had since been a huge contributing factor to many karaoke nights, fast-food lunches, and even one recording session where his tight drumming was the only thing keeping an inebriated rendition of “Janie Jones” together. I told Harold of my quest thus far and the noise show I hoped to end up at, and, as I expected, he was willing, able, and excited to follow me into whatever abyss awaited. And when we walked into the random building in question, Andrew was the first person we saw.

Who knows what lessons I would be mulling from Andrew’s inadvertent test had I gone the other way, but I doubt they would have benefited my book. Surely I wouldn’t have witnessed Andrew’s intensely visceral, all-consuming response to his friend’s sounds, nor would I have appreciated how blissfully blistering that live noise experience was to my virgin ears.

Had I headed south rather than north, I wouldn’t have run into my own dear friend, whose sudden appearance in my I Get Wet adventure reminded me of musical camaraderie and my most beloved writing project up to that point. And though it would take a few days for the hint to surface, that journalistic reminder ultimately informed the way in which Steev Mike’s story would be told in my book.

Most troubling of all, if I had ignored Andrew and followed safe reason, perhaps my brain’s delicate sensibilities would have convinced my heart it wasn’t up for the true Andrew W.K. challenge. I believed my intentions of getting wet were full-bore and true; I’m just stoked my visceral reaction was to step outside.
Andrew W.K.’s I Get Wet is available on Bloomsbury.com,via Amazon or wherever 33 1/3s are sold.