TO CELEBRATE THE UPCOMING RELEASE OF OUR 107TH 33/13 ON  BEAT HAPPENING, WE’RE PLEASED TO BRING YOU THE VERY FIRST INSTALLMENT OF BEAT HAPPENING WEEK BY AUTHOR BRYAN PARKER !

Shortly after I moved to Austin, TX for university in 2001, I began to frequent the now defunct record store 33 Degrees north of campus, where Phil Waldorf (who’s now a partner in Dead Oceans/Secretly Canadian) sold me CDs and kept me headed in the right direction. 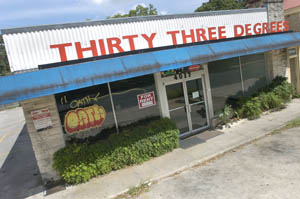 It was in that store that I picked up a curious and slim CD from an end cap. It wasn’t a jewel case, a fact that immediately piqued my interest. The album cover featured an illustration of an elephant in a nighttime forest turned sideways. The trees were oddly rudimentary, but I loved the drawing at once. I flipped the case over to find different sizes of handwriting delineating the album’s twenty songs. And there, at the bottom center, was the K, surrounded by a crude shield.

After that, the K kept appearing on albums I liked—not only on records by Beck and Modest Mouse, but also lesser-known artists I found as I dug deeper into music coming out of the independent underground—early recordings by Mirah, The Blow, and Karl Blau. Around 2004, my then girlfriend made me a mix CD—still likely the best mix I’ve ever received—which not only featured songs by great bands like Big Star and New Order but also leaned heavily on twee pop and included Beat Happening’s track “fourteen.”

It likely took months before I worked my way through all the artists and songs on the CD, meticulously researching the albums from which the songs derived, the bands’ discographies, and related artists. This was the era of long hours of listening to albums on discmans set up in used CD stores and researching via web forums. I remember that I listened to the mix enough to have completely internalized the song’s bouncing lyrics—“We were wearin’ our pajamas / We were eatin’ some bananas / I wanna tell you how / I wanna be your pal”—long before I grasped Beat Happening’s place in this thing called K with which I was already loosely familiar.

Eventually pieces began to fall into place, and my admiration for the work of Beat Happening grew with each little discovery. In fact, through my roles as a writer, researcher, and pop culture historian, I’ve found some kinship in conversations with Calvin. He has discussed always wanting to find the original any time he learns a song is a cover. I can relate to this line of thinking. I’ve never been satisfied to hear a song in isolation on the radio or in a random friend’s car or in a café; I always need to know more. A little bit of digging always turns up a new path to follow and then another. Ultimately, I guess it’s that kind of digging that led me to want to write a book about a band that I believe deserves an entry in the pages of music history.

The work of cataloguing music’s history should concern documenting not only popular bands that garner fame but also bands that quietly expand our notions of art and inform artists who follow. Beat Happening operated as progenitors in just this way by proving that one could make music by oneself, without credentials, without restriction, and without following cultural guidelines. It was the ethos they endowed rather than a sound—a contribution that lasts forever rather than the course of one musical trend. Many see K’s roster as terribly disparate, but the label’s discography is cohesive in that the artists all remain wholly committed to an artistic vision and are willing to take risks. Beat Happening had everything to do with Phil Elverum’s band The Microphones. Phil himself has remarked that being granted the basic premise that one could “do whatever” created the space that made his art possible.

Even that music industry juggernaut Nirvana owes something to Beat Happening and K Records. Music writers have noted the Beatles’ indisputable influence on Nirvana, and while this remains true, the model that embodied the simplicity of pop in Kurt’s own community was Beat Happening, who also served as an example to young musicians that making music was a tangible reality and not just some distant dream relegated to the sounds mysteriously engraved in grooves of vinyl. Coupled, these two truths clearly informed Kurt Cobain’s music. Need proof? Look no further than the K Records tattoo on Kurt’s left forearm. Of course, in my book, Nirvana is, as here, mentioned only briefly and peripherally; I want to live in a world where Nirvana is the footnote to Beat Happening, not the other way around. 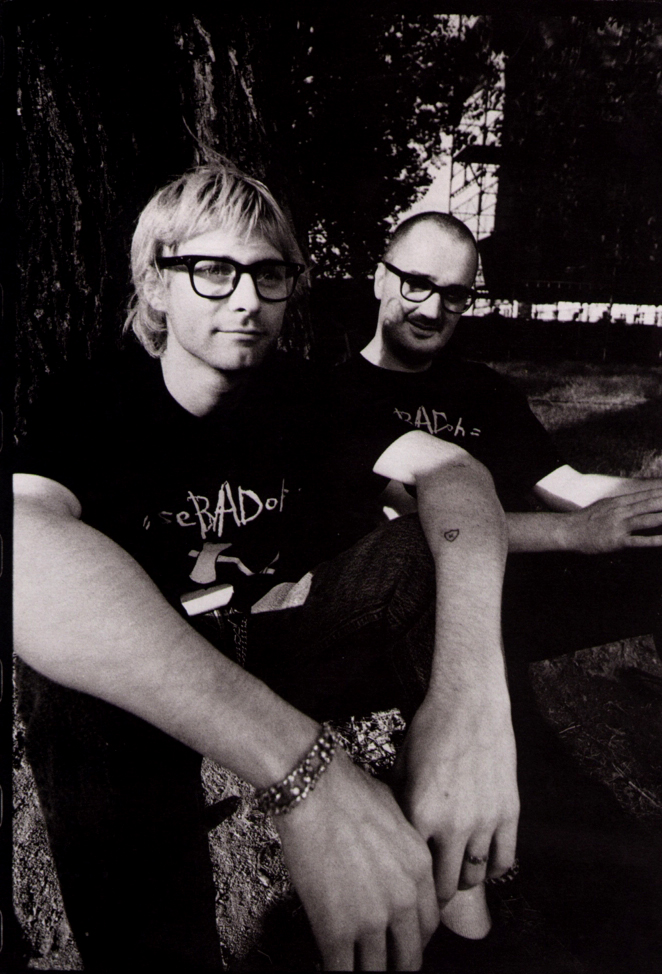 It’s a little bewildering that a little band from Olympia, Washington started a project that made waves that have touched so many people. Phil Elverum, Kurt Cobain, me, all of us—hanging out in the house of K. The network Beat Happening and K Records spawned echoes the essential and indefinable quality of music itself. It might sound cheesy, but music for me has been this expansive net that has ensnared a vast range of people, places, and experiences, holding us all together in some way. I can’t help but be thankful for all of the people and occurrences along the way. So, thanks, Calvin, Bret, and Heather; Phil Waldorf and Phil Elverum; 33 Degrees; Austin, TX; Mirah; Khaela; Mariella Luz; Olympia, WA; Ally Jane Grossan; David Barker; 33 1/3; and everything connected to everything else.

One Thought to “Beat Happening Week – Day 1: Discovering K, or How I Got to This Moment, Right Here”