TO CELEBRATE TODAY’S RELEASE OF OUR 107TH 33 1/3 ON  BEAT HAPPENING, WE’RE PLEASED TO BRING YOU THE FOURTH INSTALLMENT OF BEAT HAPPENING WEEK BY AUTHOR BRYAN PARKER ! 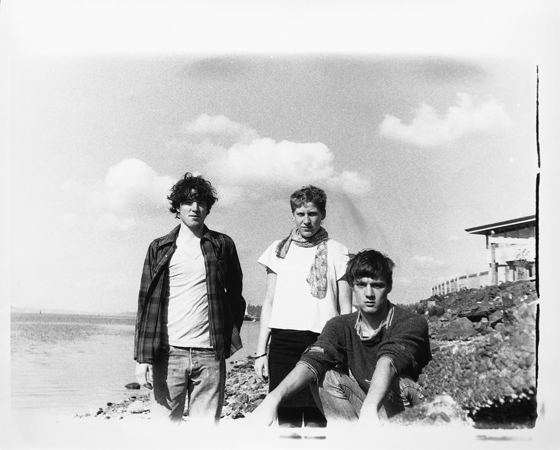 In 2013, while on a trip to the Anacortes Unknown Music Series, I came up with the idea to interview Calvin Johnson on video. I was bringing some audio and video equipment to do some low budget documentary work about the festival anyway. Plus, I had spent some time around Calvin since first interviewing him in 2007, and had formed some friendships with other members of the K family. It felt casual – no big deal. Of course, I hadn’t done many video interviews before, and by the time I took two long city bus routes from Seattle to Olympia and got ready to set up the equipment, I was pretty anxious.

Calvin sat patiently, with an air of indifference, as I positioned two different cameras at varying angles and synced settings and tested audio levels. Turns out that manning two cameras and recording audio while actually participating in an interview is pretty tough. Not to mention that since I was using two digital still cameras (not video cameras) to shoot video they would only record for a certain number of minutes, so the whole interview was conducted with a degree of concern that they would shut off at any moment.

Okay. Cameras were rolling. I checked the audio source one final time. I took a deep breath, and asked my first question. At risk of sounding like a click-baity Upworthy headline – you have to see what happened next to believe it. Maybe that’s an exaggeration, but I believe the response is too priceless to reduce to words. And that’s why I’m sharing the video today. Two questions in, some random and very loud construction starts happening right outside the window where we’re talking. It’s not even simply comical in retrospect; it was so inopportune that it was ludicrously comical even in that moment. I think my takeaway as soon as the interview wrapped up was: “Well, I can never use that for anything.”

But not too long after, I started loving the interview. I would show it to a few friends every now and then, and I liked it more with each viewing. Calvin can be hard to talk to sometimes, because he tends to just be himself without worrying at all about meeting the expectations of the other person. Don’t mistake me, Calvin can be forthcoming, supportive, helpful, and hilarious, but it certainly won’t be to meet the expectations of anyone else. In interviews, this seems intensified, and giving explanations or expounding on philosophy isn’t really at the top of the list for the former Beat Happening frontman. You’re on your own.

The video is sort of a disaster, but I love it for just that reason. And further still, I think it’s objectively engaging. Despite the awkward timing, slow pace, and construction noises, Calvin makes some powerful responses. The superficial features of the interview partially mask the true greatness—a statement that incidentally applies also to Beat Happening itself. Ultimately, I think the interview captures Calvin and his ethos well.  I love every response he gives and find each simultaneously insightful, unexpectedly hilarious, and oddly compelling.

Consider the core realities of the exchanges: Q: Was there a show or band that changed your personal definition of what music was? A: Many shows have moved me, but the basic idea of rock ‘n’ roll hasn’t changed in my mind. Here is Calvin affirming the steadfastness of his DIY and punk values. Q: Where does your ability to self-start, create a label, create albums come from? A: Turning off the TV is hard, but then it’s not that different from making dinner. Perhaps there’s an implicit criticism of homogenized nuclear age culture here, but even beyond that, this response refuses to lend an iota of power to the thought that any difficulty lies in tasks others have found and still find daunting. And that’s where Calvin’s ability to self-start comes from. The answer is in the question.