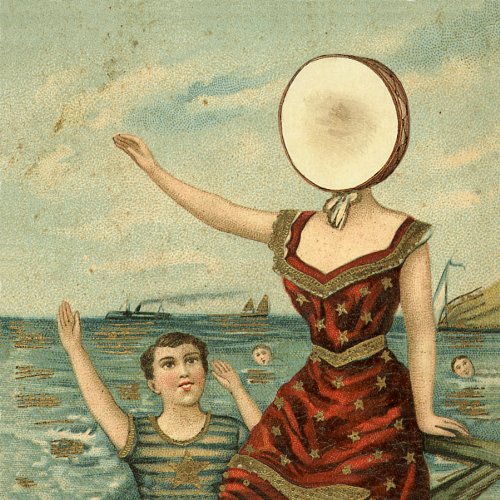 Classic Album Sundays is kicking off the new year by celebrating Neutral Milk Hotel’s In the Aeroplane Over the Sea! The listening parties will be hosted in London, Brooklyn, and Oslo, at Brilliant Corners, Baby’s All Right, and Månen, respectively. Find out more here! And even if you can’t make it out to any of these events, what better way to inaugurate 2015 than to gather a group of friends around your record player and experience one of the greatest albums to come out of Elephant 6 from start to finish together?

“In the Aeroplane Over the Sea is one of the fuzziest records ever made, and yet it is completely lacking in over-the-counter fuzz effects. Every bit of distortion was handcrafted to satisfy the demanding ears of Jeff [Magnum] and Robert [Schneider]. Robert explains, ‘In general, when I record, I tend to max out the equipment. I push the compressors really hard. I like to push the mics. Jeff really liked everything to be coated in a layer of fuzz. I worked very hard to get the fuzz sound—and it was different from the first record—it was a lot better…We didn’t use fuzztones at all. There are no Big Muffs or distortion pedals or anything like that. I had a few different pieces of equipment at the time. I had a Bellari RP-220 tube mic pre-amp that would distort back on everything. I put the microphone close to Jeff’s guitar. An acoustic guitar has a rattle to it. For me, what’s appealing about acoustic guitar is the way it buzzes. I would position the mic in such a way that it would catch some of that. So right off the acoustic guitar, you’re getting some distorition-like sound—it’s off the strings…There were a lot of different sources of distortion, but it was all studio distortion, there was no effect distortion…in-line distortion sounds punchy, microphone distortion sounds round and thick—and that’s why the Neutral Milk record has that feeling.'”

– From In the Aeroplane Over the Sea, by Kim Cooper