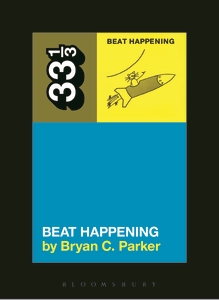 This is the album that sent a shockwave of empowerment through the nation’s cultural underground. In 1985, Beat Happening released their eponymous debut of lo-fi pop songs on K Records and challenged every conception held about music. At the center of the group was the enigmatic Calvin Johnson and his revolutionary vision of artistic creation. His foresight and industriousness allowed him to recruit to the K Records roster other free-spirited artists like Beck, Modest Mouse, and Built to Spill long before they gained widespread acclaim.

If you want to learn more about the author, check out our Q&A with Bryan and Bryan’s update from his trip last year to the Anacortes Unknown music festival, featuring Beat Happening themselves!

You can also read an exclusive excerpt from the book below! The following commentary comes with regard to our author’s first interview with Calvin Johnson, in which the artist responded to a question about cupcakes. “Well, you see, I’m from an era when the cupcake was frowned upon,” Johnson mused. “But then again, a cupcake doesn’t have to be something that’s bad for you.”

Twenty seconds into their official debut on lead track “Foggy Eyes,” Beat Happening clearly delineate their practice of challenging conventions and reevaluating the world, as Heather Lewis sings, “Open up your eyes and speak your mind.” Calvin confirms this sentiment on the next track, “Bad Seeds,” claiming, “We just see this world in a different way / We’re bad seeds.” The band has never been shy about verbalizing their intent to question standards. Beat Happening can’t claim to be the first band to see or do things differently. However, they provided a whole different way to do things differently. Even bands like the Ramones or Minor Threat that broke rules did so by playing with the rules, stepping over the lines, pushing them outward, drawing them in new ways. Beat Happening simply pretended there were no lines at all.

More so than anyone I’ve encountered, Calvin Johnson undefines the world around him. He looks at a cupcake, sees the ingredients, and invents a new recipe. Peering past the cupcake’s recognizable sprinkled frosting and seeing the raw ingredients imperceptible to most, he acts as the baker—playing and experimenting with the balance of new and old ingredients to transform this familiar object from the inside out. The refreshing result defies expectation, with each bite a new experience. …

… Beat Happening serves as a guidebook for self-actualization. For this particular cast of individuals, that meant starting a band without knowing how to play an instrument and creating a method of disseminating their art within a self-created network of like minds. But the story of Beat Happening transcends music and resonates with humanity at large. Where some saw laughably inexperienced musicians, others detected power within their unadulterated, rebellious, and youthful spirit. We could all use a little naïveté. Sometimes we need to forget there’s a way to do things. It’s the only way to make progress possible. This book is an instruction manual for chasing dreams, resisting the oppressive social mores of culture, and unapologetically following one’s own inner voice. If I’ve done it right, these alphabetic ingredients constitute a recipe book for feeding your creative spirit.

You can find Beat Happening in stores on September 24, 2015.