Skip to content
You are here
Home > 33 1/3 > Excerpt: Metallica’s Metallica by David Masciotra, Coming in September! 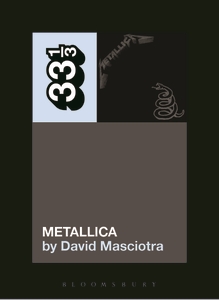 We are super excited to introduce one of our two new titles for this September, Metallica’s Metallica by David Masciotra!

In this book, Masciotra takes readers into the recording studio, giving them Metallica’s account of how their most successful and famous record was born and learned to walk into every radio station and stadium stage around the world. Masciotra not only talks to the band about the making of the album, but also the stories that inspired the songs. Readers will not only learn about “The Black Album,” but they will also gain greater knowledge of and familiarity with the men who created it.

Be sure to check out our Q&A with David from last year to learn more about him and his writing process.

Can’t wait until September? We’ve also included an exclusive excerpt from the book below as a small taste of what’s to come. Enjoy!

American pop culture has steadily become a behemoth candy store, dishing out pure sugar and syrup in quantities so large the container sizes are outdone only by the frivolity of their content. It is the nature of American culture to take what was once a force for rebellion, and transform it into a vehicle for commerce. Eventually, the whimpering voices of the moralists in politics and religion are impossible to hear over the deafening chorus from business that asks, “Why spend time fighting something when we can make money off it?”

Rock ‘n’ roll, from the censorship of Elvis Presley’s hips to product placement in slick music videos, captures the triumph of the market over morality better than most cultural developments. Everyone who loves living in a wild and fun culture full of variety should applaud whenever business and consumers are able to silence the moralists. The only problem is one of dilution. How does a countercultural force, born and raised on the edges of American life, keep its power when it moves into the mainstream?

In the 1980s, rock ‘n’ roll, led by bands like Bon Jovi and Poison, was about big haired heartthrobs in eyeliner singing saccharine ballads to excitable high school girls. Meanwhile, Michael Jackson was doing commercials for Pepsi, and Bruce Springsteen was lip-syncing to Courtney Cox with less sexual intensity than a castrated corpse.

Heavy Metal, the loud, thick, distorted, and fast form of rock ‘n’ roll universally ignored by radio, MTV, and “respectable” music critics throughout the 1980s, was in the parking lot of the candy store pouring bottles of acid and serving them up with sneers and middle fingers to anyone whose minds were brave and throats were strong. It began in the 1970s, with bands like Black Sabbath, Led Zeppelin, and Deep Purple steering the flagships, and by the 1980s, due to the influence of Judas Priest, Iron Maiden, and other British metal bands, ripped out its blues roots, becoming more obsessed with velocity and aggression. Metallica, along with the other “Big Four” bands, Slayer, Megadeth, and Anthrax, helped create a new form of metal called thrash. Eventually, Metallica would separate themselves from their three early allies in ways musically and substantively significant, but even at day one there was divergence.

With cult classics like Kill ’Em All, Ride the Lightning, Master of Puppets, and …And Justice For All, Metallica were the ones making the most lyrically complex and sonically progressive music of the heavy metal rebels. Their revolt was not only one of ballistic artillery, but also brainpower. Their bottles of acid might cause the regurgitation of weakness, but they would also strengthen the spirit.

Metallica’s Metallica will be available for purchase in the U.S. on September 24, 2015.