Skip to content
You are here
Home > 33 1/3 > Gang of Four Week: How I Learned to Stop Worrying and Love the Interview

Welcome to Gang of Four Week, in celebration of our forthcoming 33 1/3 title on Gang of Four’s Entertainment! by Kevin J. H. Dettmar. Here, Dettmar discusses overcoming his fears in writing his 33 1/3. 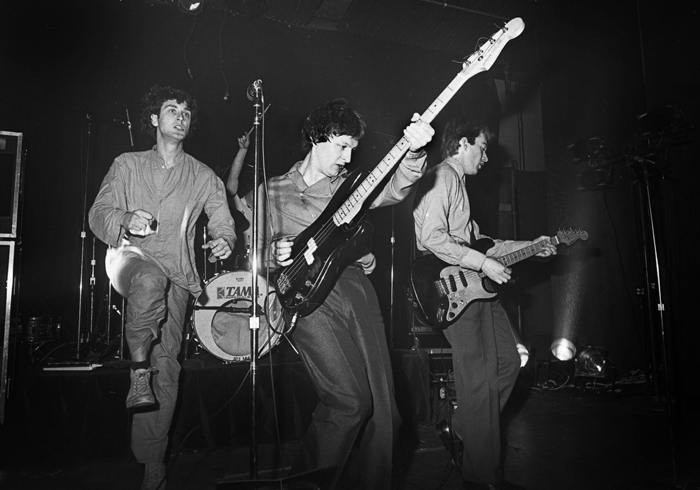 The biggest hurdle—well, the biggest hurdle was getting my proposal for a 33 1/3 past the gatekeepers! I teach at a “selective college,” but I think even the odds of getting into Harvard are better than getting the green light from our friends at Bloomsbury. I’m still feeling surprised and lucky that I made it.

Having cleared that initial hurdle, though, another one loomed: the interviews. While not a requirement, certainly many of the books in the series I most admire include new interview material with the artist or band. In my case, the band members were dispersed across three cities in two countries, but I did what I could to contact them, and after a while, I managed to get in touch with them all. And each agreed to sit down with me for an interview.

That’s when the real panic started. In my “day job,” I’m a scholar of modernist literature: I write about art made by dead folks. James Joyce, whose writing was the focus of my first book, died almost two decades before I was born. And that suits me fine: I love the work of cultural analysis, but I like writing about writers who can’t talk back. Who can’t say, as Marshall McLuhan memorably said to the pontificating college professor in Annie Hall, “you know nothing of my work.”

But interviewing the Gang of Four? Asking them questions, venturing theories, risking opinions? The prospect terrified me. In part because, though the whole argument wasn’t yet clear in my head, I knew that mine would be a rather personal interpretation of the album, one I could hardly expect the band members to corroborate or sanction. In part, because I’d read so many interviews with them—and so often, they’d cut their interviewers cold. Would I prove to be the idiot that they wouldn’t suffer gladly?

There was only one way to find out. The annual meeting of the Modern Language Association in January 2013 was held in Boston; I arranged to meet Hugo Burnham, the band’s drummer, for coffee and a chat at the Sheraton on the Sunday of the conference. I arrived early and milled about the lobby, nervously; as guys walked in the front doors I scrutinized each to see whether he might be Hugo. A half-dozen times, I nearly left in a panic: if I stood him up—well, it would be a shitty thing to do, since he was coming into the city center from the suburbs on a cold Sunday morning. But he’d get over it, I figured: all I had to do, I’d imagined, would be to ignore his angry emails.

But I screwed my courage to the sticking place, and after a number of “false positives,” recognized Hugo when he walked in the lobby—as he did me. (Nothing says English professor like a goatee and horn-rimmed glasses, I guess.) We got that coffee, and talked for an hour … and the time flew by. I never did put my foot in my mouth—or if I did, Hugo was too polite to point it out. We talked about the album, and the Gang of Four show I saw, and about the music scene at that time—and since; we talked about our subsequent lives, our families, our work—the sort of stuff middle-aged men everywhere talk about.

It wasn’t a brilliant interview, probably: certainly I asked no hard-hitting or shit-stirring sorts of questions. (The band had the misfortune of one pretty awful band bio interested more in the intra-band feuds than in the music they made; I wanted to steer as far clear of that as possible.) But it went well, and was comfortable, enjoyable even. It made the subsequent interviews, in Portland, Oregon, and London, much easier: by the end, I was even getting good at it. In the end Hugo, Dave (bass), Jon (lead singer), and Andy (guitar) were just as eager to get their story out there as I was. It’s a story that’s as compelling today as it was when the album dropped, 35 years ago.
Gang of Four’s Entertainment! is available for pre-order from Amazon and Bloomsbury.com, and will be available everywhere 33 1/3s are sold on April 24.

0 Thoughts to “Gang of Four Week: How I Learned to Stop Worrying and Love the Interview”