Skip to content
You are here
Home > 33 1/3 > Gang of Four Week: They Were Only Freshmen

Gang of Four Week, in celebration of our forthcoming 33 1/3 title on Gang of Four’s Entertainment! by Kevin J. H. Dettmar, continues. Here’s Kevin on how to make your Entertainment! amuse bouche into an entire GoF meal. 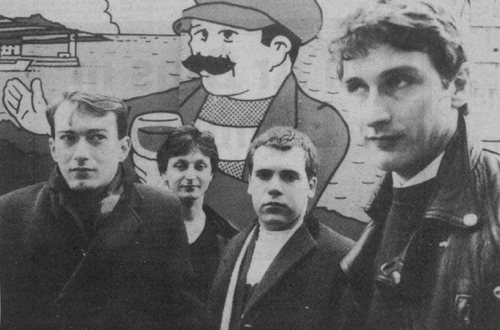 There’s something misleading in writing an entire book on a band’s debut album: it might suggest that nothing that follows is worth seeking out. And certainly, in the case of Gang of Four, that’s not the case. While I’m not alone in thinking that none of their subsequent albums represents the consistent high achievement of Entertainment!, there are many brilliant tracks on the later albums, some of which I couldn’t help but refer to in my 33 1/3.

So I thought for today and tomorrow I’d suggest a “what’s-next” list for those who have now listened to, and come to care about, Entertainment! Here are the first 5 in a top 10 list of the essential post-Entertainment! work, listed chronologically. We’ll finish up tomorrow.

1.    “Armalite Rifle” (1978). It was right there on the band’s first recording, the Fast Product “Damaged Goods” single. You can understand why it fell out of the band’s repertoire; although its tongue-in-cheek humor ages well, the song’s somewhat obvious politics do not. But for me, the intentional clumsiness of the sloganeering stands as a great corrective to what the Clash, at the very same moment, were doing with a straight face.

2.    “Why Theory?” (Solid Gold, 1981). The song, which takes its title and some of its lyric from a feminist broadside Andy happened upon, is perhaps the single clearest articulation, in song form, of the band’s overriding political interests. “Each day seems like a natural fact / And what we think changes how we act.” Bonus: some tasty, heavily reverbed harmonium from Jon.

3.    “Outside the Trains Don’t Run on Time” (Solid Gold, 1981). Oh, the bitter melodrama of the besieged male under Thatcherism! The logical partner of “He’d Send in the Army” (below), the song replicates with frightening fidelity the internal logic of masculine resentment and barely suppressed domestic violence.

4.    “He’d Send in the Army” (Solid Gold, 1981). Never captured in the studio with quite the spontaneous energy of its stage versions (see above), the song sets multiple rhythms into conflict, Andy’s guitar dropping in and out with unnerving unpredictability. Another ironic hymn to the institutionalization of masculinist logic and rage.

5.    “What We All Want” (Solid Gold, 1981). The song Hugo has frequently named his favorite to play—and you’ll immediately see, or feel, why. It’s a monster riff that builds and builds across the song’s five minutes, the multiple rhythms of Andy’s guitar troubling Hugo’s and Dave’s rock-steady beat. Though I reference the Stones’ song in the book in another context, lyrically this is the Gang of Four’s “(I Can’t Get No) Satisfaction”—and it’s fucking brilliant.
Gang of Four’s Entertainment! is available for pre-order from Amazon and Bloomsbury.com, and will be available everywhere 33 1/3s are sold on April 24.

0 Thoughts to “Gang of Four Week: They Were Only Freshmen”