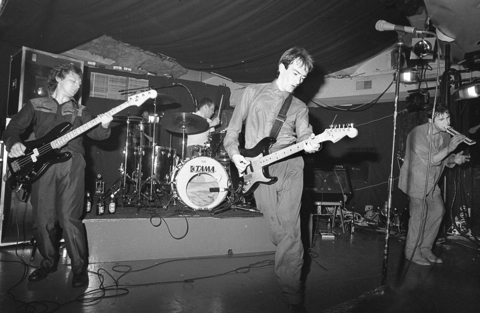 6.    “Call Me Up” (Songs of the Free, 1982). The opening track of the band’s third album is the first Gang of Four song to make brilliant use of female voices. Andy’s guitar has never sounded more Jimi Hendrix military. And we get our first taste of just how those female voices might be used to shine a withering spotlight on the macho pretentions of Jon’s male protagonists (see “I Love a Man in a Uniform,” below).

7.    “We Live As We Dream, Alone” (Songs of the Free, 1982). The band takes a famous line from a novella full of them, Joseph Conrad’s Heart of Darkness (1898), and weaves from it a Marxist parable of the isolation of the modern worker. “Everybody is in too many pieces / No man’s land surrounds our desires….” And as a song it’s funky as hell, between Sarah Lee’s bass, Andy’s baritone (voice), and Jon’s falsetto chant of a chorus.

[youtube http://www.youtube.com/watch?v=DLnIf0JjszY?rel=0]
8.    “I Love a Man in a Uniform” (Songs of the Free, 1982). A controversial choice: the song either suffers from or (I believe) snickers at its almost disco production style (see above). [Author’s note: Hugo is the drummer on this track; I regret the error.] And yet the song is of a piece with, albeit at a parodic extreme from, “He’d Send in the Army” and “Outside the Trains.” But the burning question: is the song aware just how cheesy it is? For a treat, listen as well to the lyrically stripped down (and sonically tarted up) dub remix included on recent pressings of the CD.

9.    “You Don’t Have to Be Mad” (Content, 2011). Just when no one was expecting it, a new Gang of Four lineup came out with a new studio album after a 16-year hiatus (not including the 2005 rerecording/remixing project Return the Gift). “You Don’t Have to Be Mad” sounds every bit like an earlier Gang of Four song, but feels contemporary in its production. Perhaps the easiest way to describe it is that it sounds like Entertainment!-era Gang of Four, but channeled through the band’s imitators: Gang of Four doing their impression of a Strokes knockoff of a Gang of Four song. If that description sounds derivative, the track itself does not: it crackles with new energy (in a way that the album’s single, the topical track about the worldwide real estate bubble “You’ll Never Pay for the Farm,” did not). And the current Gang of Four lineup is putting the finishing touches on a new album now, I’m told, which Andy hopes will be out in the fall.

10.    The Barbican, London, 24th September 2005 [Live]. This is cheating, I know. But if you can get your hands on this rarity somehow, do it. When the original band members reunited in 2005, they played the entirety of Entertainment! (with the strange omission of “Contract”) live at the Barbican in London, with the performance captured on this two-disc set. It’s sloppy but powerful. Highlights include the fully reimagined “Glass” that I discuss in the book, as well as a great, galloping “At Home He’s a Tourist” and a truly huge version of “What We All Want” to close out the evening.
Gang of Four’s Entertainment! is available for pre-order from Amazon and Bloomsbury.com, and will be available everywhere 33 1/3s are sold on April 24.

0 Thoughts to “Gang of Four Week: Now, Where Were We?”