Skip to content
You are here
Home > Bob Mould > Introducing: our 33 1/3 on Bob Mould’s Workbook

Ahead of its publication on September 7, authors Walter Biggins and Daniel Couch share exactly why Bob Mould’s Workbook has had such an impact in their lives, and why it took them almost 25 years to be able to fully appreciate its message. 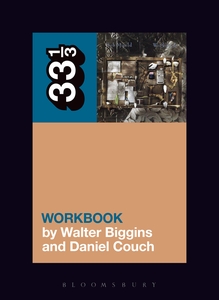 alter Biggins and Daniel Couch, and we are fans of Bob Mould.

We started listening to his music in high school, and our friendship was cemented through decoding Mould’s distinctive mix of searing lyrics, noise barrage, and melodic pop. We were 15, 16 years old at the time, and at once too late to see Bob in his first incarnation—Hüsker Du had broken up in 1987, when we still wore Underoos and Keds—and too young to get into clubs to see Sugar, Bob’s band at the time and, through Copper Blue and Beaster, our effective introduction to the man.

So, despite our fascination with Bob and collecting anything of his we could get our hands on, we didn’t get to actually see Bob live with a band until an October 2005 show in Seattle. We were joyous and yelping that we got to see Bob together, sweating and slapping fives and making Dan’s then-girlfriend (now his wife) giggle at our rock nerdiness, replaying the show as we bounced home from the venue. Dan shouted out into the chilly Seattle night: “They went on that stage with one purpose and one purpose only—to kick our asses! No stage banter, no pauses, just an hour and a half of full-on attack.” Walter nodded, grinning like a fool. It was like we were sixteen years old all over again but more comfortable with ourselves.

But we weren’t. That night, we were on the cusp of our thirties, about the same age that Bob Mould when he composed and recorded Workbook. Moving from adolescence and stumbling through our twenties, we had gone through plenty—cross-country moves, rising and falling relationships, money woes, family dramas, the works—and were just beginning to process it, make sense of it all, and prepare ourselves to move forward. These are the major themes of Workbook, Bob’s debut as a solo artist, in which he both turned inward lyrically and transformed himself musically. It’s a record of a man growing up into adulthood and, in the process, growing past his legacy as a post-punk legend. In many ways, we think of Workbook as Bob’s most quintessential album, the record showing the most versions of him in a single package, precisely at a moment when he was questioning the packaging in the first place.

We wish we could say that we were ready for Workbook when we were sixteen sneaking through the high-school hallways, or even singing along in Seattle that night, but that wouldn’t be quite right. We were glad to hear a rocked-out version of “See A Little Light” (Workbook‘s hit single) that night, sure, but the album’s acoustic subtlety and introspective focus were too mature for us as teenagers and, we thought, maybe a little passé by the time we were closing out our twenties. We both admired Workbook but neither of us loved it.

No, it took another decade’s worth of transitions—marriages, children, more relocation, more job changes—to fully get us on Workbook‘s wavelength. By the time we were both approaching 40, we lived three time zones apart and communicated mostly by phone and email. Gradually, we began talking about the ever-shifting path toward emotional maturity, about our place with our communities versus our place as individuals, about figuring out how to manage our creative drives while still keeping food on the table. More and more, we used Workbook as a talking point, a model for how this adulthood thing might be done. That’s what the record has always been about. In 2014, 25 years after its first release, we were finally at the right age for it.

Two years later, we had written a draft of that ongoing conversation about Workbook, including all the people—Bob, Anton Fier (drums), Tony Maimone (bass), Jane Scarpantoni (cello), Steven Haigler (engineer), and others—who made the album into our crosstalk through interviews and email chats. Somehow, though, we didn’t feel like we could be done with the correspondence until we got to see Bob live one more time. Bob was older, perhaps wearier, and more worried. So were we, looking down the barrel of a Trump presidency and accepting that our hair wasn’t gonna grow back and our potbellies were gonna get harder to carve away. We didn’t get to see Bob together—Dan saw him in Portland; Walter in Athens, Georgia—but it didn’t matter. Bob and his band (Jason Narducy on bass, Jon Wurster on drums) blazed through both nights, as loud, powerful, and yet somehow intimate as the music always was. We did the same pogoing and yelling as before, though our knees and our throats felt it more the next day than they had in 2005. That’s okay. It’s good to feel sixteen, sure, but it’s just as good to view it from a distance, with gratitude and forbearance rather than fear and longing.

That, in part, is what Workbook taught us, why we return to it, and why we wrote a whole book about it. Maybe, after reading it, you’ll feel the same way about Workbook that we do.