Today, we bring you a Q&A with Jenn Pelly, who will be writing the 33 1/3 on The Raincoats! 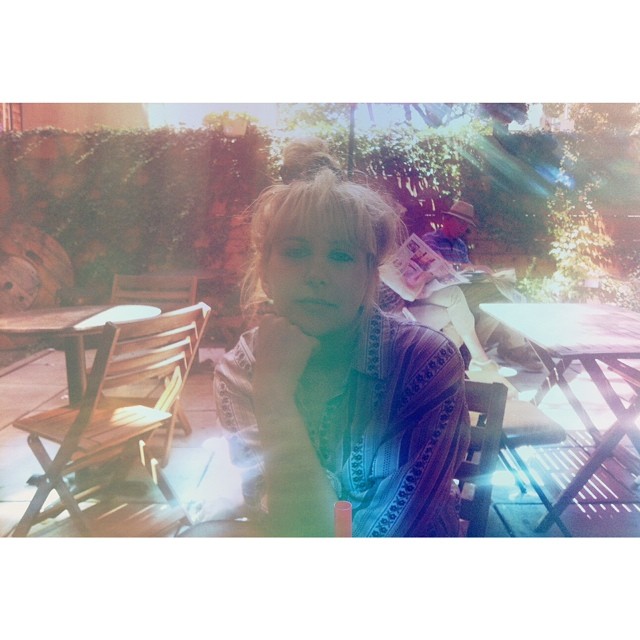 My name is Jenn Pelly and I am from Long Island, N.Y. I was born exactly 10 years after The Raincoats. I decided to become a writer when I was five, after an author came to one of my Daisy’s meetings and read to us from an illustrated children’s book about anthropomorphic soap bubbles who hang out at the edge of a rainbow. In retrospect it was a very psychedelic entry. I spent my formative tween years attending local pop-punk and hardcore shows, before abandoning that in favor of hanging out in the city and further warping my brain. By the time I was a teenager I’d become enamored of NY’s cultural history, starting with Greenwich Village and then the downtown 70s art/punk scene.

I started writing for my local alt-weekly when I was 16 and consistently freelanced until the fall of 2011, when I was hired by Pitchfork, where I am now Associate Editor. I graduated from NYU in the spring of 2011, where I studied journalism and literature with minors in college radio (s/o WNYU 89.1 FM), zine libraries, and Bob Dylan. I’ve written for publications ranging from Xeroxed fanzines to mainstream magazines like Nylon and SPIN to the websites of Rolling Stone and The New York Times. I’ve been organizing shows sporadically since I was a teenager, and have recently put together lineups at MoMA PS1 and Judson Memorial Church. I identify as a feminist and it informs everything I do.

The Raincoats has been one of my favorite albums since the first time I heard it. It is a foundational piece in the lineage of feminist punk, post-punk, art rock, and the culture of DIY music, all of which are major interests of mine. Since it first entered my life, The Raincoats has been one of those soul-cleansing records that I always want to hear. When pitching I knew I wanted to focus on non-male artists, since the series has already covered so many records made by men. There has also been a visible surge of academic interest in riot grrrl over the past few years, and the Raincoats precede 90s punk feminism in an interesting way. I was and am curious to explore how The Raincoats fits in there.

I’ve also come of age at a time where “independent culture” seems quite fully formed on the surface, but in reality words like “DIY”, “indie”, “underground”, “punk”, “alternative”, etc have been watered down and don’t really signify much of anything. So, an investigation of The Raincoats offers an opportunity to look at the roots and meaning of these concepts, and hopefully motivate another generation of music fans with them. I didn’t experience post-punk, riot grrrl, or the first wave of indie rock first-hand — I was born in 1989 — but what I have experienced is the enduring power of their narratives. I have experienced first-hand that stories about DIY punk are really stories about self-manifestation. They are stories about the life-changing build-up to these explosive genesis periods, where one believes in herself enough to start creating her own reality through whatever means possible. This is obvious in DIY punk tales like Our Band Could Be Your Life or the more recent Girls to the Front, as well as the histories of labels like Rough Trade, Dischord, and K.

The list is really long, but I just booked a trip to London for November, where I will be interviewing the band and exploring their archive. I plan to visit the library at NME. Aside from that, Tobi Vail is very high on my list; reliable sources tell me that she introduced The Raincoats to Kurt.

Unlike most things in my life, pitching this book was a pretty straightforward experience. I’ve had the idea of a Raincoats book in my head since 33 1/3 put out a call for proposals in 2012. After thinking about it for two years, it came together fairly quickly.

I surprised myself when I began reflecting on my own Raincoats fandom and remembered how I found out about them. As it turns out, it was through 33 1/3 books (sort of) ——— It was a cold Friday night around 2 a.m. and I was with some friends at Cakeshop on the Lower East Side. I was 19 at the time. I didn’t really want to be at Cakeshop, so I was hanging out near the end of the bar, where they had a stack of 33 1/3s for sale, and I was paging through one. This British guy came up to me and told me I should read the Celine Dion one because it’s the best. We started talking about the books. It turns out he was in a band I sort of liked, and we ended up hanging out a lot that year. Near the end of the summer he sent me a mix and “Lola” was on it. It was the first time I heard the Raincoats but it was perfect timing. Their music has been omnipresent in my “adult” life.

I want to situate The Raincoats as one of music’s most enduring and definitive examples of DIY counterculture as a sound. I want to use The Raincoats to remind Gen Z that experimentation does not mean that music is necessarily challenging or inaccessible. I want to offer a reminder that unpolished records are important, powerful, and cool.

I have read so many of them — I have almost the entire collection at my apartment, my roommate won them in a raffle in 2012. The first one I read was Jeff Buckley’s Grace in high school. Let’s Talk About Love stands out as a model. I loved my former NYU professor Bryan Waterman’s book on Marquee Moon because it was so well contextualized, Amanda Petrusich on Pink Moon, the books on Horses and The Velvet Underground and Nico (both of which I studied in college), Another Green World, many more.

It was an emo band from New Jersey at a venue called The Downtown on Long Island, in middle school… they were not a good band. The first time I saw the Raincoats was in 2010 at the Museum of Modern Art. I was totally broke that week and had to walk 80 blocks through Manhattan from my dorm to the museum. Needless to say it was worth it!

I listen to records on vinyl. It’s the most fun and complete way to experience recorded music. To me it is kind of like the difference between lighting a candle versus turning on a flashlight, and it also sounds better. I listen to CDs and cassettes, too, but less often.

I love when Gina sings this line on “In Love” — “I’m so happy/ Happy, sad.” It’s one of the most simple, plainspoken lyrics I can imagine, but the way she delivers it is so raw, beautiful, human, and true. It kind of captures the essence of using simple parts to create magic.