Read our Q&A with Rebecca Wallwork, soon-to-be author of the new 33 1/3 on the New Kids on the Block’s Hangin’ Tough! 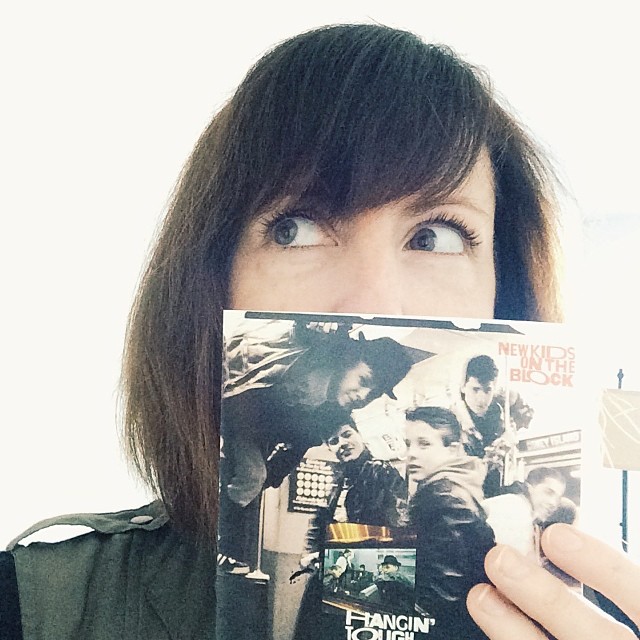 I’m a writer, editor and content director (mostly for travel brands). These days I specialize in digital content but I have a long history in magazines, ever since my first internship at Interview magazine, where I later became the music editor—during a great time to be one; when watching Kings of Leon, The Strokes and the Yeah Yeah Yeahs live in NYC was part of my job. I’ve also interviewed celebrities and written about entertainment and lifestyle for publications such as Rolling Stone, The New York Post, SUNDAY magazine, Madison magazine, and Men’s Style Australia. In the name of journalism, I have been inside the New York Jets locker room and backstage at the Westminster dog show. I attended Donald Trump’s wedding, the porn-industry awards, and reality-TV school. In more recent years, as a travel writer, I’ve been a contributing editor for Tennis magazine and sites like HotelChatter, Jaunted and Jetsetter. I’ve written for WSJ. Magazine, Forbes Travel Guide and TravelandLeisure.com. I also write fiction and still daydream about getting an MFA.

If you’re going to write a book about New Kids on the Block—and I’ve always wanted to—there is no other album that comes close to Hangin’ Tough in terms of significance. And I mean significance for the band—it was their second album but the one that catapulted them to fame after a slow burn at release—but also significance in the wider world of pop music. Yes, there had been boy bands of a sort before the New Kids, but these guys were the first to have such incredible success. This was the album that kicked off an era in music that extends right through to One Direction today. That said, most writing about the New Kids from 1989 up until today has nothing to do with their music. Their press has always been about their fans, their producer Maurice Starr, the mass production of New Kids merchandise in the early 90s—or about their sideline projects. I wanted to approach Hangin’ Tough like any other influential album, with a critical eye and solid reporting that can explain why it was so successful.

I’m just starting this part of the project and feel rather superstitious about talking about it too soon. But obviously, I want to talk to people who were a key part of making the album, and people who were involved in the music industry in 1989. I’m also interested in the science of music and how that might (if at all) explain some of Hangin’ Tough’s success, so I’ll be reaching out to music cognition experts, and no doubt a psychologist or two.

I have fellow 33 1/3 author Phillip Crandall to thank for this pitch. When he was working on his own proposal for his (exhaustively researched and awesome) book on Andrew W.K., he was reading a book about bubblegum pop and I happened to be quoted in it. (It was a line pulled from a review I did for some boy band album back in the 90s.) When he showed me, we got talking about the series and I immediately thought of Hangin’ Tough. Phil prompted me to submit a proposal—twice. The second time I listened to him. Although I think he secretly wants me to write a book about “Good Vibrations” by Marky Mark & The Funky Bunch instead.

My initial idea was simply to think about Hangin’ Tough as a blueprint for pop success and as this band’s legacy. They went away, reunited in 2008, have made new music, toured, done solo projects and appeared in movies and on TV, but this album will in some way always be what they are most remembered for. That was interesting to me, since they were so young when it was made. Imagine something you did at 15 or 16 becoming the defining product of your career. It’s kind of terrifying and I was intrigued by that.

I also thought about writing about the mighty Blockheads, the New Kids fans who are still so ardently committed to the band today. But that’s been done before—I’ve done it myself in a magazine article—and a biography on them by Nikki Van Noy that came out in 2012 also covered the fans pretty extensively. I wanted to look at something no one had really explored and it quickly hit me that the thing I was looking for was the music itself.

As I said, the music. And since I’m not a music critic per se, despite my years writing about music and pop stars, I wanted to take a professional approach and set out to ask others—critics, industry insiders, producers—what they thought of Hangin’ Tough. Then I got interested in the idea of the science of music and talking to music cognition experts who may be able to tell me if there is something in the songs themselves that captured the hearts of so many teenaged girls in 1989. Yes, I’m sure their looks and dance moves had something to do with it. But we wouldn’t have even seen any of that if it weren’t for the music. The songs came first. What’s so special about them that grown women pushing 40 still scream like banshees when they hear the opening bars of “Please Don’t Go Girl” or throw their arms in the air for the chorus of “Hangin’ Tough?”

As an Aussie, I had to read the AC/DC book on Highway to Hell. I also read Carl Wilson’s now iconic book about Celine Dion’s Let’s Talk About Love—partly because it’s one of the few books in the series about a major pop star. Although, let’s be clear, my stance is completely different. Wilson hated Dion and wanted to know why she was so successful. I love the New Kids but I realize that my being a fan makes me somewhat of an unreliable narrator. Which is why I’m turning to others to ask them what they think about Hangin’ Tough. I can’t write an impartial critical review of the album based entirely on my own opinion—but I can certainly explore its genesis and success by talking to other people. I have a bunch of other 33 1/3s to read—including ones on the Beastie Boys, Prince and Bruce Springsteen—but my favourite is Phil Crandall’s I Get Wet. I wasn’t actually intimately familiar with Andrew W.K.’s story or music before reading it so it was eye-opening and new. I was also impressed with the sheer amount of research Phil did and how he weaved it all together. He’s a crackerjack storyteller.

You want me to say New Kids, don’t you? They were my first real pop star concert. My friends and I slept on the street in Sydney to score third-row tickets for their 1992 show—and then snuck into front row on the night. Ah-mazing. We couldn’t believe we had to wait so long for them to tour Australia—if I had seen them live in 1990 or 1991 at the height of their fame I may have hyperventilated. But before that, my first concert was a holiday show for Young Talent Time—they were a Mickey Mouse Club-like troupe of kid performers in Australia. (Responsible for Dannii Minogue, Kylie’s little sister who was famous first.) Look, I was an 80s child through and through. The more dancing, the more synthesizers, the better.

I have some vinyl back home at my dad’s house in Australia but I never brought a record player over to the US with me and vinyl is so impractical to move. That said, I was a CD-era kid anyway (after, ahem, growing up buying cassettes and cassingles.) Now I listen mostly to MP3s for sheer convenience, although when I want to listen to an album “the old way”—meaning in the order the artist wanted you to hear it, and all the way through—I’ll put the CD on. I also listen to Spotify and Pandora when I want more of a radio-listening experience. I love not knowing what the next track might be. It’s like the jukebox at a bar—“let’s just wait to hear what the next song is.” And the next, and the next. Hello, hangover.

It has to be this line from the song “Hangin’ Tough”: “And if you try to keep us down, we’re gonna come right back.” That sums up the album for me, and also the New Kids’ career. They were booed—including when they were accepting their 1989 American Music Awards. They had haters right from the get-go, when they did live shows inside prisons, at retirement homes and at African American schools in Massachusetts. As New Kids fans, you cop a lot of crap, too. I got booed at school for loving them but it didn’t stop me. The New Kids did come back and so did their fans. Even today, 25 years on, Donnie Wahlberg will say something on stage about the group and the fans refusing to back down in the face of criticism—and the crowd will go nuts. There’s no keeping a New Kid or a New Kid fan down—including this one.