In honor of RJ Wheaton’s 33 1/3 on Portishead’s Dummy as well as the 20th anniversary of the album, we bring you the fourth and final installment of Portishead Week.

To close out this week on Portishead, design, and film, it only makes sense to include the short film that the band made with director Alexander Hemming. The film provided footage for the video for “Sour Times”, and stills for the covers of singles “Numb”, “Sour Times”, “Glory Box”, and Dummy itself.

But first: John Barry’s theme for the 1965 thriller The Ipcress File, which Adrian Utley admired for a level of experimentation with instrumentation and arrangements that was absent from some of the composer’s other work.

We just thought we’d make a film instead of the normal pop video, then we could take stills from it and use them as artwork for the album, but it meant we could also write a soundtrack for 10 minutes, which we wouldn’t otherwise have got a chance to do. I don’t like the way so much money is spent on video when there’s so many struggling film makers around.

Director Alexander Hemming remembered meeting the band and his reaction to hearing tracks from Dummy:

I said they reminded me a little of soundtracks of movies from the ’70s and then we spent the next few hours talking about the movies we liked such as Ipcress File and Get Carter. Not just the soundtracks… but also the visuals too. The way odd camera angles were used and also shooting through or past something in the foreground, whether it was a window, windscreen, mirror or anything else for that matter, the view often obscured by something else.

The film was premiered at a promotional screening with the 1971 Michael Caine-starring Get Carter; and was shown selectively in advance of some screenings of films like Pulp Fiction and Madonna vehicle Body of Evidence. 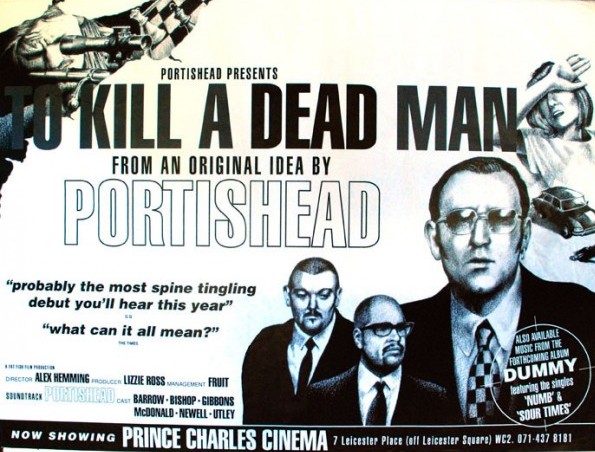 The band were quickly uncomfortable with the quality of the film, with Barrow telling Julie Taraska in 1997 that:

I think it was a dreadful piece of film. Basically, it was done so that we could write some film music. Not to put down anyone involved with the film, but we should have done it with pure images, rather than having us in it. It was misunderstood, what we wanted to get out of it. It created an image, and the whole idea was for it not to.

In many ways that speaks to the unrest that Portishead have always had with the perception of their music, particularly Dummy. Barrow told interviewer Kai Jones “It was just badly interpreted our music, it was so terribly interpreted.”

But after 20 years Dummy has shrugged off most of the weak genre affectations of its ‘trip-hop’ imitators and rewards listening with fresh ears, usually at higher volumes.

So, finally, to close out the week, a performance of “Wandering Star” from a 2008 French tour. Compare this to the mechanical force of the original. It’s no less emotionally remorseless, yet clearly bridges the beautiful, angular austerity of their later work. I’ve written largely about Dummy this week; but Portishead and Third — not to mention the live Roseland NYC and a host of singles and remixes — all reward close listening. Thank you for reading. – RJ Wheaton
[youtube https://www.youtube.com/watch?v=JXkondOj7pg]