Bloomsbury is so pleased to announce the publication of the FIRST book about beloved UK record label, Sarah Records. It’s called Popkiss: The Life and Afterlife of Sarah Records by Michael White. We hope to make it available to you in early 2015. You can visit the book’s facebook page here and follow the book on twitter at @SarahRecordsBoo for more information. 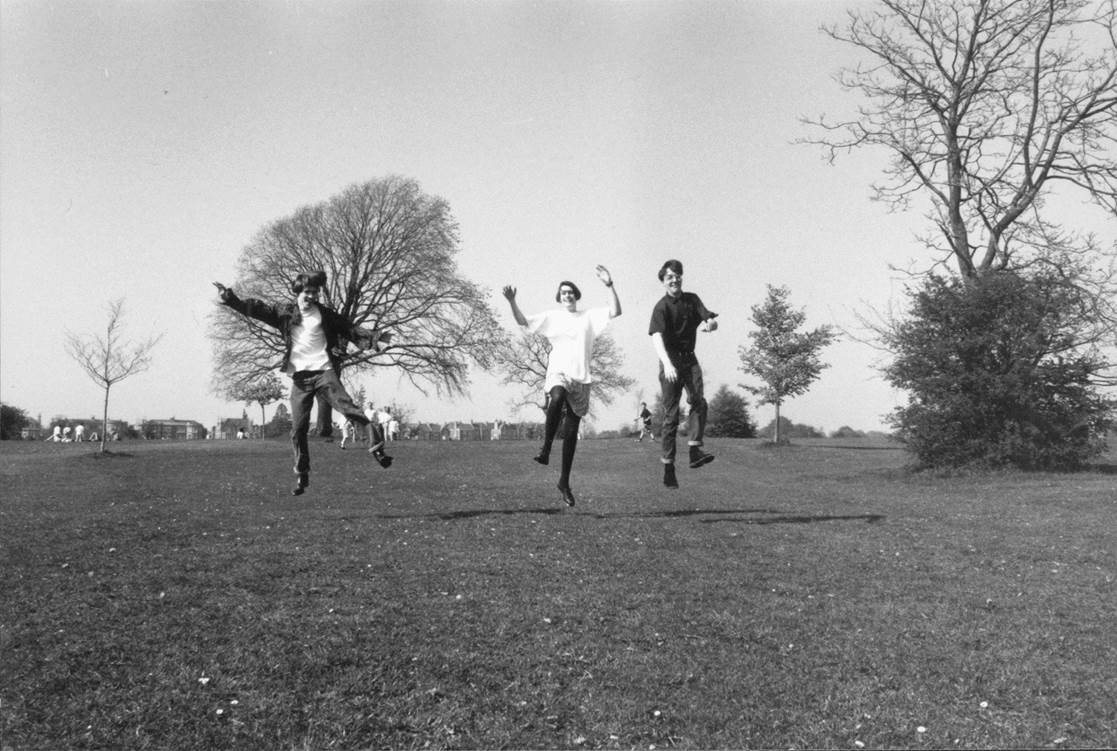 Brighter celebrate an English summer day in Bristol, in the park opposite Sarah Records’ flat/office

Here are some words from the author, Michael White:

I had been thinking about it for at least a year. But, typically of me, it wasn’t until I’d had one too many cocktails and was in the company of a sympathetic friend that I felt suitably emboldened to foist a long-festering interior monologue upon a captive audience of one. “I think I want to write a book about Sarah Records,” I said to her. I emphasized “think” for two reasons: firstly, because the circumstances of my life in late 2009 — a demanding job that left little time for extracurricular pursuits, plus my own upcoming wedding — didn’t seem as if they would accommodate it; and, more pertinently, I wasn’t sure that enough people would be interested, never mind a publisher. 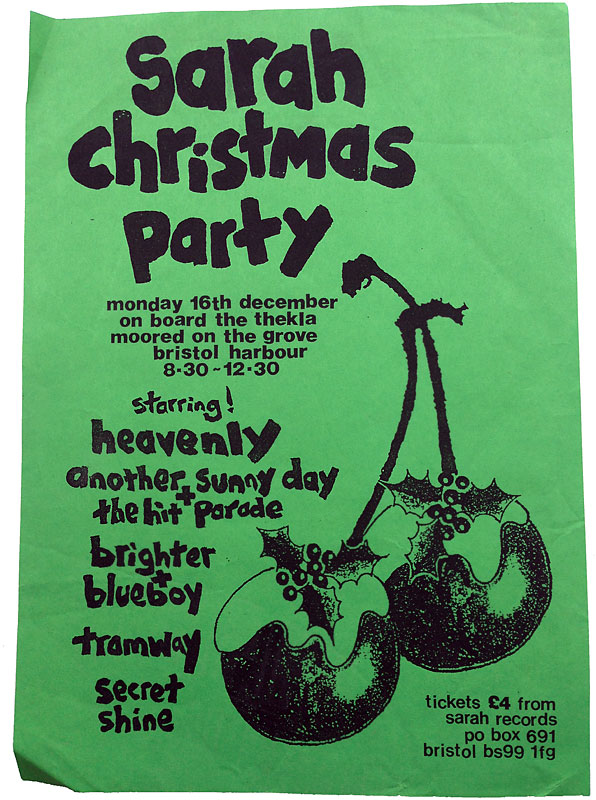 A flyer for the Sarah Christmas Party in 1991.

I write this almost four years to the day since I sat in a Vancouver bar, drunkenly bending the ear of poor Vanessa. To my astonishment, she is still my friend. And, to my greater astonishment, I find myself in the final months of writing a book about Sarah Records, behind which a respected international publisher, Bloomsbury, has agreed to throw its weight.

Within the grand scheme of pop history, Sarah Records is an esoteric subject, to say the least. In brief: it was an independent label from Bristol, England, that existed between 1987 and ’95. Although its catalogue of roughly 140 releases is more stylistically diverse than most potted biographies suggest, Sarah is inextricably associated with one genre, a nebulous entity commonly referred to as indie-pop. (Other popular descriptors are ‘C86’, ‘cutie’ and ‘twee’, the origins and meanings of which are too convoluted — and too loaded with troubling connotations — to detail here.) 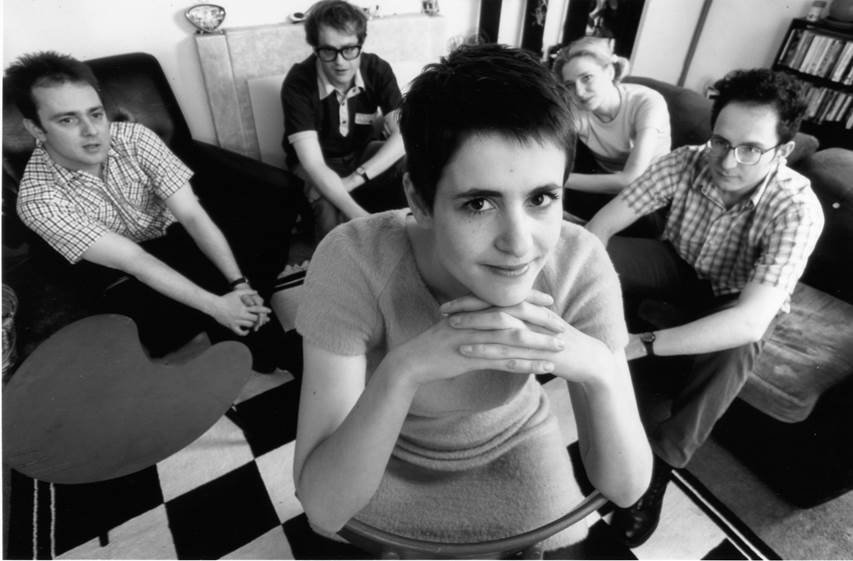 Although indie-pop is, in essence, pop music created by bands who record for independent labels, its aural and aesthetic attributes tend to be much more specific than such a broad definition implies. Initially, it was among the most unlikely of many artistic responses to the “anything goes” impulse of the early-’80s post-punk era. Indie-pop shared with punk the ranking of progressive ideas and youthful enthusiasm above technical ability, but rather than being based in volume and aggression, its primary attributes were melody and an unashamedly sensitive worldview. The oft-cited godfathers of the genre are Glasgow band Orange Juice, whose early recordings combined the brittle, economical sonic profile of Buzzcocks and Subway Sect (not coincidentally, two of punk’s most melodic, least virile bands) with the sunshine-evoking tunefulness of 1960s AM radio staples such as the Byrds and the Lovin’ Spoonful (and, further left of the dial, the Velvet Underground’s beautifully sparse third album). Indie-pop arguably reached its creative and commercial apex with the Smiths, a band whose charisma and sterling musicianship were such an exception to the norm that they singlehandedly ushered a longtime underground sound into the Top 10 of the U.K. charts. They were, however, just that: an exception. Their spiritual contemporaries largely remained in the shadows, either incapable of or disinterested in breaking out of indie-pop’s clandestine community of misfits. While mainstream 1980s pop reflected the aspirational tenor of the times — the latest and most expensive sounds (and sartorial complements) that money could buy — indie-pop was a rogue nation of conscientious objectors, seeking refuge from an inhospitable decade in the curated ephemera and signifiers of decades past, whether they be Rickenbacker guitars, fringed suede jackets or a well-worn copy of Nuggets.

When Sarah Records emerged in late ’87, indie-pop’s moment was generally thought to be over. The Smiths had recently broken up, and the music of their less successful peers had fallen out of favour among the vast majority of writers at the U.K.’s weekly music papers, which wielded considerable make-or-break power at the time. Although a small number of journalists did champion the label (including Bob Stanley, who would soon find fame as cofounder of Saint Etienne), for the most part its bands were characterized as pitiable late arrivals to a party everyone else had sensibly deserted. Amidst the bracing innovations of Pixies, My Bloody Valentine, the Young Gods, and acid house and hip-hop as a whole, why, the naysaying majority asked, would anyone want to make time for the likes of the Field Mice, Another Sunny Day, the Orchids, and Brighter? Surely there was no longer a need for pleasant, modestly rendered music that sought only to resurrect some long-ago golden age, and that was made available almost exclusively on the increasingly obsolescent 7-inch vinyl format.

And yet, it proved that a sizeable number of people did feel a need for the music Sarah released — not so many people that the label was perceived as competition to EMI and Warner, or even to Creation and Factory, but enough that Sarah sustained itself assuredly for eight years, ceasing operations only when Matt Haynes and Clare Wadd, the young couple who founded it, decided the time had come to do something else. What’s more, Sarah’s following was international and fiercely devoted: People throughout Europe, in North America, Japan, the Netherlands, the Philippines and elsewhere, came to think of Sarah as a mark of quality, seeking out every new record that bore its name.

I was one of them. In the summer of ’90, during my first visit to England, I persuaded my travelling companion’s aunt, who lived near London, to drive me 100-plus miles to Bristol to meet Matt and Clare. Despite them being possessed of a shyness to which I, a motormouth Canadian, couldn’t relate, they invited the three of us in to their miniscule flat, fed us tea and biscuits, played us records, and graciously answered every stupid question I asked. This, I later found out, was not uncommon: Fans from around the world arrived at their doorstep virtually every week — many of whom, unlike me, wouldn’t bother to tell them they were coming — and they hosted them all as best they could, even when there were days’ worth of letters to be answered (they tried to hand-write a reply to every one), orders to be processed, artwork to be designed, demos to be listened to….

Matt and Clare, who were Sarah’s only employees, engendered an uncommonly intimate relationship with the label’s following, communicating with them through fanzines (which were given their own Sarah catalogue numbers), leaflets that were enclosed with every 7-inch, and all of those aforementioned letters. As well, members of the unofficial Cult of Sarah would seek each other out — whether their distance from one other was a matter of cities or continents — to exchange correspondence, mixtapes, and often the fanzines they themselves had been moved to create. While the rapid-fire musical trends of the early ’90s — Madchester, shoegaze, grunge, Britpop — advanced and receded, Sarah bands existed at a rarefied remove, both benefactors and victims of the label’s perennial outsider status. Occasionally, the NME or Melody Maker couldn’t help but to acknowledge the greatness of, say, Blueboy’s gorgeously baroque Unisex album, or the Field Mice’s masterful pop-dance hybrid, “Missing the Moon.” But, for the most part, indifference or hostility remained their reflex response to a new arrival from the little label in Bristol. I read the British music press religiously then and generally revered its opinions, but I disregarded them when they wrote negatively about Sarah, and I knew there were thousands of others like me. 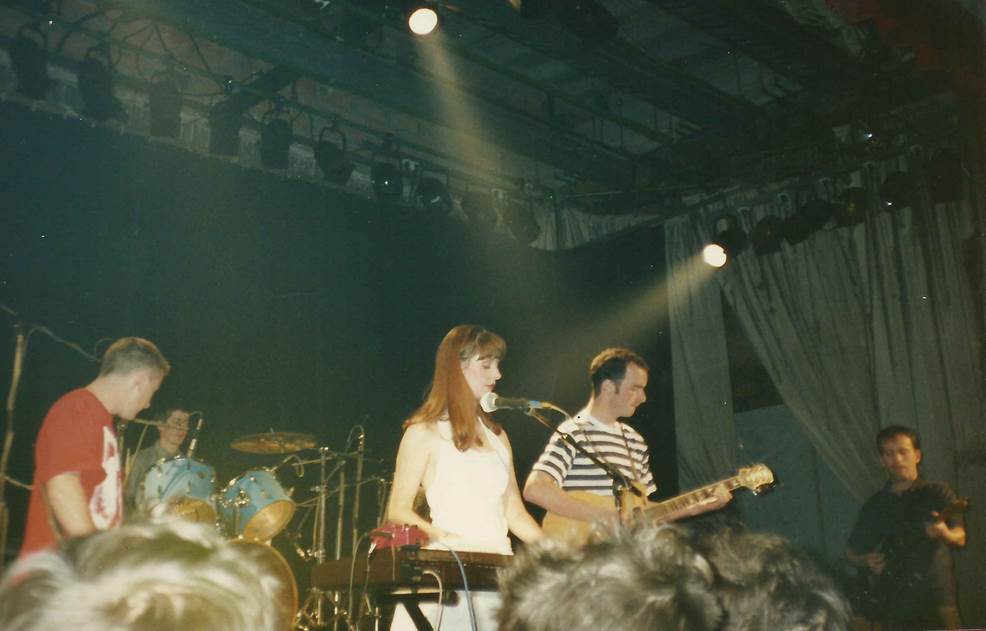 The Wake performing live in the early 1990s. The Glasgow band was signed to Factory Records before coming to Sarah in ’89.

Sarah’s ability to persevere and flourish, and to mean as much as it did to the global audience that loved its music, is the essential reason why a book is being written about it (and why, simultaneous to my own work, someone in Bristol has spent the past four years making a documentary). But the Sarah story didn’t end in August 1995, when Matt and Clare announced the label’s closure with a half-page ad, headlined “a day for destroying things…”, in both the NME and Melody Maker. Throughout the eighteen-plus years that have followed, people everywhere — many of whom weren’t yet born in ’95 — have continued to discover and be fascinated by Sarah, paying vast sums for the records, and scouring for whatever information they can find, which is very little. What with Sarah ending before the Internet became a part of everyday life, and having been so poorly documented in the first place (not even YouTube offers much more than a few amateur audience recordings), it tantalizes new generations of fans who have grown up accustomed to being able to find out whatever they want to know with a Google search or two. 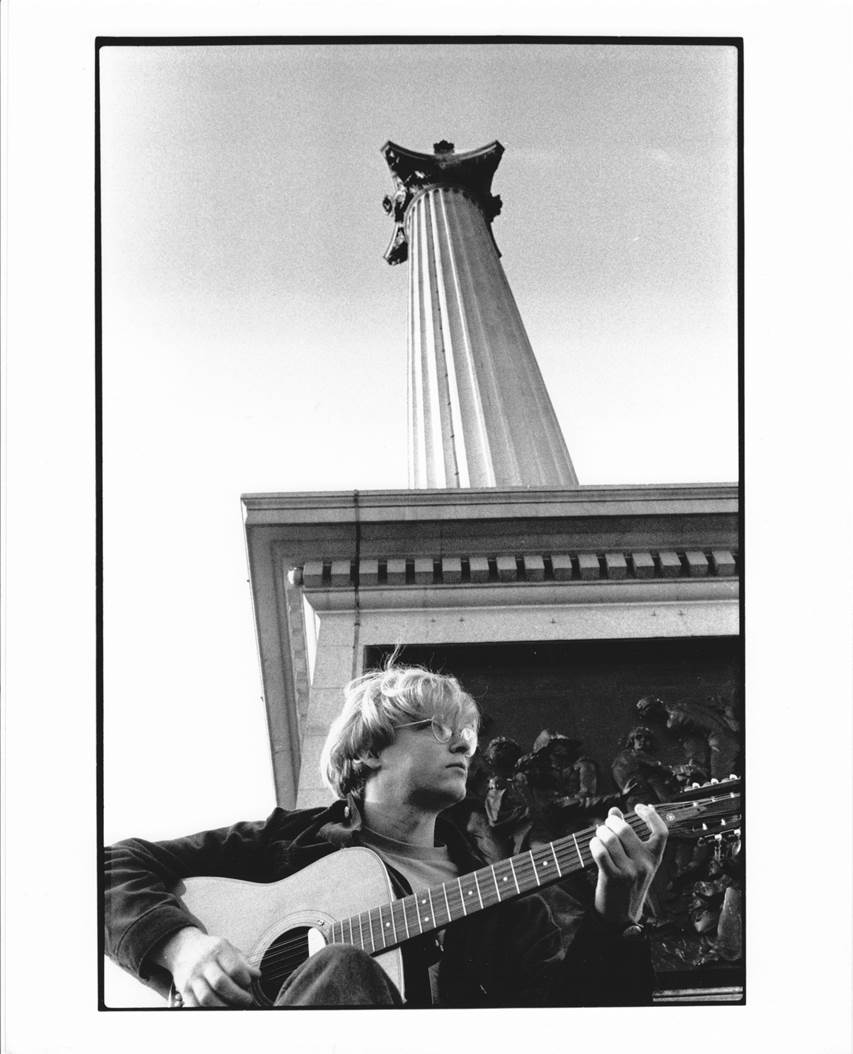 Harvey Williams, who recorded for Sarah under his own name and as Another Sunny Day. He was also, at various times, a member of label-mates Blueboy and the Field Mice.

My aim is that this book will finally sate the years or decades of curiosity among those who, like me, love the music Sarah put into the world, and the unique way it complemented that music with the indirect encouragement to find new friends, think in new ways, and perhaps create something of one’s own. When my work is done, I’ll have interviewed more than 100 people, including Matt, Clare and the people who made up Sarah’s 30-plus bands. My 20-year-old self is incredulous about every last one of them.

Oh… And the book is to be called Popkiss: The Life and Afterlife of Sarah Records. It takes its title from a Blueboy song, and I think it sums up what Sarah provided — and continues to provide — as well as any made-up word ever could.
[youtube=http://www.youtube.com/watch?v=pocvsfnRE-E&w=560&h=315]

0 Thoughts to “We are Publishing a Book about Sarah Records”