Cry no tears as Andrew W.K. week comes to a close; the party goes on. Here in his last blog entry, I Get Wet 33 1/3 author Phillip Crandall looks at the album’s liner notes in search of the friends who have helped make the AWK party an epic all-nighter. From here on out, you can follow the book’s exploits on Twitter: @HeyYouLetsParty. 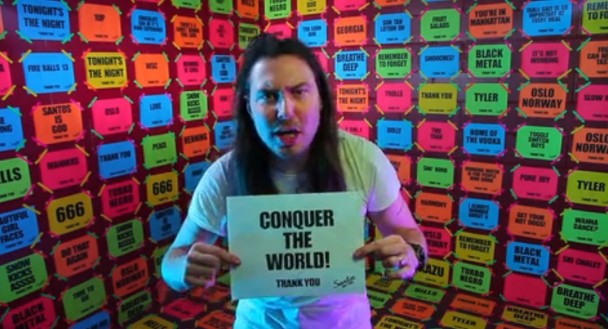 Listed underneath the “All songs written by Andrew W.K.” credit in I Get Wet’s liner notes are the names of established producers, names of session musicians, names that have been abbreviated and altered, names that have enchanted and engaged, and names whose listings pay tribute to a life’s worth of impact and friendship more than they acknowledge in-studio assistance. And while the I Get Wet 33 1/3 takes a more thorough look at these collaborations with and connections to Andrew, it simply can’t illuminate these names with the magical dimension of music.

In addition to Dilloway’s solo stuff, his Vimeo page is an absolute treasure trove archiving the noisiest of Ann Arbor efforts in the ‘90s, from his bands — Galen, Isis & Werewolves, The Beast People, etc. — to the bands of others credited on IGW, including Anthony “Dirty Tony” Miller and Nate Young. (Wolf Eyes, just one of Dilloway and Young’s collaborations, is regarded as noise deities, but the band got its largest spotlight in this scene from The Office.) A 1997 promo for Dilloway’s label features many of these bands as well, not to mention a teenage Andrew Wilkes-Krier at his living room piano at around the 11:03 mark.

Along with Jim Magas (credited for Technical Assistance on the 10th anniversary edition of IGW), Larson was a founding member of Bulb Records and the band Couch. Couch’s live show and 7-inch had a huge influence on Andrew and Dilloway, both of whom would eventually sit behind that Couch drum-kit at least once. “We did an impromptu Couch reunion in 2000,” Magas remembers. “We went out there and fumbled our way through all the Couch hits with Andrew on drums, who had never played with us before. He did a good job. If you can hit the drum, you could be in that band.”

Thomas’ pop mastery is on beautiful display as the singer/songwriter/leader of Saturday Looks Good To Me (see also: “Until The World Stops Spinning” and “When The Party Ends.” Andrew’s band Ancient Art of Boar put out a tape on Thomas’ Westside Audio Laboratories label, and the title track “Bright Dole” features Thomas on guitar and more giddy whimsy than you can possibly be prepared for.

The former Chavez leader, Zwan member, and frequent Bonnie “Prince” Billy collaborator has played guitar with everyone from Johnny Cash and Current 93 to Neil Diamond and Dave Grohl’s Probot.

[youtube=http://www.youtube.com/watch?v=Jad2jDniIVU&w=420&h=315]
MATT QUIGLEY
IGW credit (as Quigley): Technical Assistance
Video: “Beauty Crawls,” by Skunk
Skunk included teenagers Quigley, Sweeney, and Matt Coleman, who would later go by Claude and drum for Ween. Right around the time he met Andrew, Quigley’s band Vaganza was about to release its debut, chock full of gorgeous gems like “She’s Crazy” and “Everyday.”

[youtube=http://www.youtube.com/watch?v=jUSXZAtCaRQ&w=560&h=315]
PHIL SOLEM
IGW credit (as P. Solem): Technical Assistance
Video: “I’ll Be There For You,” by The Rembrandts

Personal story: For most nights I worked on this book, I’d take a one-hour break at midnight to watch back-to-back syndicated episodes of 30 Rock. Let’s call it my Liz Lemon Party! It was the perfect motivator to crank out transcriptions or thoughts until 11:59 p.m., and the back-and-forth decision of whether I’d a) get back to work, or b) get some sleep had to be made by 1:01 a.m. because if I debated any later than that, it meant some character on the next show (usually Chandler Bing) would get his/her opening zinger in and the jangly guitar of the Friends theme song would invade my skull, making either option that much more difficult. Once I discovered the IGW connection through guitarist Solem (the one whose shades are swiped by Jennifer Aniston in this video), I didn’t mind the invasion nearly as much.

[youtube=http://www.youtube.com/watch?v=F7YL0WAnO2E&w=420&h=315]
JIMMY COUP
IGW credit: Guitar
Video: “Daylight Dawning,” by The Coup de Grace
Jimmy grew up with Quigley and Sweeney, and his band The Coup de Grace toured with Skunk when they were both signed to Twin/Tone. Our planet doesn’t contain a larger Thin Lizzy/Phil Lynott fan than Jimmy Coup; check out his cover of “Don’t Believe a Word.”

[youtube=http://www.youtube.com/watch?v=f9yb88fa4MA&w=420&h=315]
DONALD TARDY
IGW credit (as D.T.): Drums
Video: “Don’t Care,” by Obituary
Andrew’s fondness for this death metal band is obvious and widely known. His initial desire to distance himself from most every other musical influence probably isn’t. “The only things I wanted to be associated with,” he told me, “were Obituary, Florida, New York, (and) Michigan, but not Ann Arbor.”

STEEV MIKE
IGW credit: Executive Producer
“(Is this) Time Travel Man,” from the infamous 7-inch.
Andrew W.K.’s I Get Wet is available on Bloomsbury.com,via Amazon, or wherever 33 1/3s are sold.