Happy Day 4 of Andrew W.K. Week! As the old proverb says, you can’t make the most amazing, perfectly spiced deviled-egg party platter without smashing a few eggs. Here are but a few of the things that, for a variety of reasons, you won’t hear on I Get Wet, courtesy of 33 1/3 author Phillip Crandall. 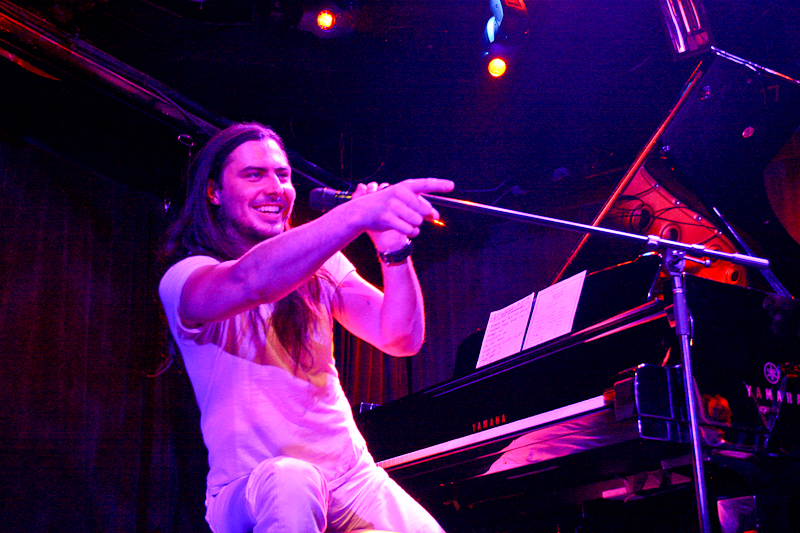 1) Almost 75 percent of the songs on The Wolf
Eight songs (and a major portion of a ninth) that were recorded for demos or EPs before I Get Wet all eventually evolved into what we hear on that album’s follow-up, The Wolf. “Free Jumps” goes way back–it’s the name of an Ann Arbor band Andrew played with, and was one of the songs Donald Tardy actually remembers recording drums for during the I Get Wet sessions.

2) An Insane Amount of Arpeggios
Andrew W.K.’s first showcase in New York City (see awesomely lo-fi video below) featured an early instrumental version of “Girls Own Love” with unrestrained flair across the entire keyboard’s landscape. That’s not to say his live shows are without ivory-unleashing today, but the arpeggio accents that bounce so naturally here didn’t make it to any released versions of the song.
[youtube=http://www.youtube.com/watch?v=oZhr_Dp-QfA&w=420&h=315]

3) “Party Music,” “Kill Yourself,” “We’re Not Gunna Get Old,” and “Kicks and Bricks”
All appeared on early demos, and with the exception of the 10-second “Party Music,” all made it to Andrew’s Mother of Mankind compilation. “There’s this one song I remember on the demo,” guitarist Jimmy Coup says of “Kill Yourself.” “It said you’re nothing and you have no real friends. A really depressing dirge, and I fucking loved it. ‘Kill Yourself’ — that makes me laugh. That is, secretly, the most honest thing he’s ever written. That’s what drives him so hard, that sense of dread.”

Coup also remembers hearing “Kicks and Bricks” and thinking it was a “hit fucking song.”
“He missed an opportunity not recording that for I Get Wet.”

“That is, secretly, the most honest thing he’s ever written. That’s what drives him so hard, that sense of dread.”

4) “Get Black On”
Technically, this is just an earlier demo version of “Take It Off,” which is track 5 on I Get Wet. But with “Get Black On,” you get those three titular words deeply growled at the beginning (rather than the group-sing-along shouts of the eventual title). Even crazier is what precedes the build-up to that growled line: a horn intro that sounds right out of James Brown’s “Get Up Offa That Thing.”* Mark Morgan, a friend and former roommate of Andrew’s, says of the early version, “It’s basically the same fucking thing, but I really like it a lot more when he sang ‘Get Black On.’ I was like, ‘fuck yeah, this is amazing,’ then he changed it to ‘Take It Off,’ and…I don’t know. I like it the other way.” (Andrew now says that “Get Black On” is a better title, and he wished he had called it that.)
*h/t to Christopher R. Weingarten (@1000TimesYes) for his help in identifying where the hell I knew that horn line from.

5) “We Want Fun”
While it appeared (along with “Make Sex”) on the Japanese version of I Get Wet, domestic listeners would have only heard it on Andrew’s earliest EP and, eventually, on the Jackass: The Movie soundtrack. Erik Payne, one of Andrew’s guitarists, is part of Team Pain, the legendary skatepark architects (led by his brother, Tim) who built ramps for “Jackass.”

6) An Essential “She is Beautiful” Part
Early versions, like the one that appeared on the 10th anniversary edition of I Get Wet, didn’t have the “I ain’t got nothing to lose” bridge. Then-manager Matt Sweeney says the bridge’s addition late in the recording sessions “improved it in a songwriting kind of way.” Andrew also made last-second changes to the structure (and, it can be argued, innocence) of the opening track, “It’s Time To Party.”
Andrew W.K.’s I Get Wet is available on Bloomsbury.com,via Amazon, or wherever 33 1/3s are sold.