Andrew W.K. week continues, this time with I Get Wet 33 1/3 author Phillip Crandall sharing some tangents and tidbits that ended up on his book’s cutting-room floor. 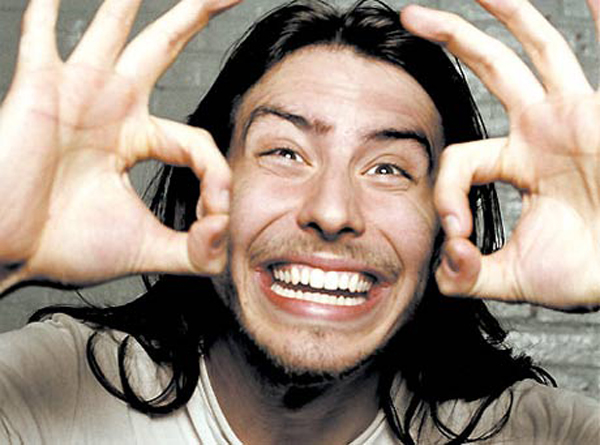 A go-to prank for teenage Andrew W.K. would be plastering downtown Ann Arbor with a mixture of eggs, flour, limburger cheese, cocoa powder, milk, and road salt. “It looked and smelled like soft diarrhea,” Andrew says, “and we threw it on people’s doors and windows and specifically targeted the parking garages where I worked, which was a bit odd because the next day I had to go there.” One night, in what he calls a “second act to an earlier event” against [Ann Arbor record store] Wazoo Records, he created another item to tag the downtown establishments with: stickers that had Wazoo’s phone number and looked like an advertisement for a towing company called Wazoo Wreckers.

Kelly Kuvo saw Andrew’s first show in New York. Prior to the show, Kuvo was approached by her (and Andrew’s) friends Aaron Dilloway and Nate Young and asked if she’d let them give her a needle tattoo. (“It’s just India art and thread where you poke, poke, poke until you get a permanent tattoo,” she says. “A lot of the arty rocker kids and crusty punks did that.”) She agreed, and they brought her a sheet of paper with design options that included a slice of pizza, a sailboat, and “AWK” in block letters. “His friends had faith in him,” she says. “That’s when I realized the full extent of him coming to New York to become a rock star. Everybody rolled their eyes because it would be embarrassing to be so blatantly obvious about wanting to be successful in music, but he wasn’t bullshitting. I think everybody secretly wants that, so why should it be so bad for him to be honest about it?”
Despite the moment of AWK-enlightenment, Kuvo settled on a tornado and cloud, right below her left collarbone.

Mixing on I Get Wet was done during the summer of 2001 in Ocean Way’s Record One studios in Los Angeles; Team AWK worked in one studio, while Dr. Dre was more or less calling the other one home. According to a profile published in TIME that September, Dr. Dre had worked three spurts of 19-plus hours one week and a marathon 56-hour session the week before, on such projects as The Wash soundtrack, a No Doubt track, and music for his own still-yet-to-be-released album, Detox.

Cory Churko did much of his sound prep for I Get Wet in a back room of Record One, often leaving a door to the back alley open so he could have some fresh air and experience some of the natural summer sunlight he’d otherwise miss in these all-day sessions. One day, a large man barreled through, asking “Who the fuck left this back door open?” The man was one of Dr. Dre’s bodyguards, and his concern was regarding someone else who might barrel through: “Don’t you guys know that Suge Knight just got out of jail?”

“That’s when I realized the full extent of him coming to New York to become a rock star. Everybody rolled their eyes because it would be embarrassing to be so blatantly obvious about wanting to be successful in music, but he wasn’t bullshitting. I think everybody secretly wants that, so why should it be so bad for him to be honest about it?”

The I Get Wet book delves a bit into the wardrobe that AWK guitarist Erik Payne was almost stuck wearing on stage, but not into fellow guitarist Jimmy Coup’s iconic threads at all. “It was hot out and I was wearing a pair of running shorts and a Hawaiian shirt,” Jimmy remembers of the accidental combo he wore during an afternoon drive with Andrew. “We were taking a left turn, and the car in front of me didn’t take the turn. Then they didn’t take the next turn. I was like, ‘What the fuck?’ I’m not a hothead, but on the third light, I remember getting out of the van and going up to the car and going, ‘What the fuck are you doing?’ Andrew was watching me and thought that I was funny, dressed like that and telling this fucking guy to come out of the truck. It just caught him. The red shirt I’m wearing in the “Party Hard” video (below) is that original Hawaiian shirt, and then I went and bought a bunch.”

The UK music press spent time with Andrew in Tampa before I Get Wet was released, filing charmed reports that he was “bigger than Jesus” and “louder than war.” (Both appear as coverlines for NME, which piled on the honorable distinctions by giving him two covers for their October 20, 2001 issue.) Louise Mayne, who worked directly with Andrew in Mercury Records’ press office, says she had never met anyone “so completely transfixed” as the British media were with Andrew. She says the image of the bloody nose — “the most beautiful picture I’ve ever seen” — was marketed around London before the actual music was. “So many people found it so offensive and so revolting that it was talked about a lot,” she says. “People just wanted to reproduce the picture in everything that they wrote about Andrew; it was an excuse almost to run the picture.”

When Andrew and the band arrived in London for their first show in October, photographer Roe Ethridge happened to be in town already — showing that very photo in a group show called “The Americans” at the Barbican Centre — and he remembers promotional pictures for the album covering every public surface. Mayne organized a press trip for whoever responded soonest to visit Stonehenge with Andrew, and somewhere in her car in the nearly two-hour drive from frigid London, Andrew heard “Party Hard” on the radio for the first time. “I think it might have really hit him that this is daytime radio in England,” Mayne says, “because he was slightly bemused by how it was all going.”

***
If you watch the official “trailer” I made for the I Get Wet 33 1/3 release–which I spent far too much time working on considering how slapdash it looks–you’ll really only notice one discernible, not-completely-ancient-looking spine on the shelf. That book, on the far left in the first split-second, is none other than the fifth edition of Property, the casebook co-authored by Andrew’s father. I didn’t get too far past the cover page in my research reading though; just far enough to see the list of the book’s editorial advisors, where I found Elizabeth Warren’s name. She’s the Massachusetts senator whose 2011 rebuttal of charges that levying additional taxes on the rich were an act of class warfare (“There is nobody in this country who got rich on his own …”) went viral and no doubt helped her win that seat.

Andrew was explaining some of the nuances of the chords he uses (versus simple power chords) when he started telling the story of how former Sex Pistols guitarist Steve Jones asked him straight-up if he had ripped off the chord structure in “Party Hard” from “Just Another Dream,” a 1980 song by Jones’ band The Professionals. (He hadn’t.) “The only other time I have heard it used is with R. Kelly’s “Ignition (Remix),” Andrew says of the 2003 jam. “I was driving around in L.A. — I think when we were recording the second album — and that song was on the radio a lot. It was just fantastic. Maybe by the third or fourth time, I was like, ‘Wait a minute.’ This is one of those great chord changes, and it hasn’t been used that much.”
Andrew W.K.’s I Get Wet is available on Bloomsbury.com,via Amazon, or wherever 33 1/3s are sold.